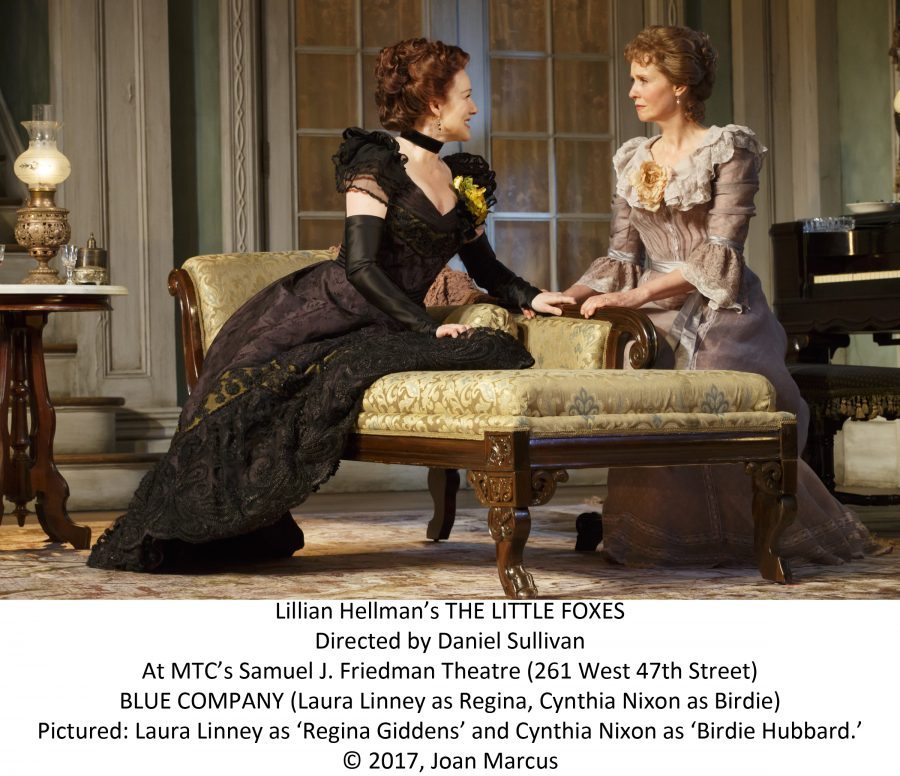 Now through its new, extended close of July 2, the Manhattan Theatre Club mounts the fifth Broadway production of Lillian Hellman's The Little Foxes at the Samuel J. Friedman Theatre. In the decades since the 1939 debut, the family drama has been adapted, often to critical acclaim, for radio, television, opera and film. The complex protagonist, Regina Giddens, is a top theatrical role for a woman over 40, and has been portrayed by a headspinning list of stars, from Bette Davis to Anne Bancroft to Elizabeth Taylor.

Perhaps, then, it’s the cultural import of the play and the weight of the role — The Little Foxes hasn’t been on Broadway in 20 years — that has Broadway abuzz with Laura Linney’s curious decision to share it with her friend and fellow actor Cynthia Nixon, who was initially to be cast in a supporting role as Birdie Hubbard, Regina’s sister-in-law. With both the blessing and encouragement of MTC’s artistic director Lynne Meadow and director Daniel Sullivan, the unconventional agreement was struck; Linney and Nixon would both tackle Regina and Birdie, switching for every performance.

For my matinee, I saw the show as it was (almost) originally cast, with Linney as Regina and Nixon as Birdie, and both women are equally memorable in a play that marries the stylized drama of southern gothic with the wit of a comedy-of-manners.

Thanks to their ruthless business sense, the Hubbards have risen over several generations to seize control of their small Alabama town, including the nearby plantation, Lionnet. With one final transaction, partnering with a successful Chicagoan to build a cotton mill on their land, the family finally stands to become the kind of “high-tone rich” to which they've long aspired.

Though the deal is officially brokered by her brothers, Ben and Oscar, Regina — ignored in her father’s will and legally excised from the Hubbard clan by marriage, but every bit as calculating as her brothers — does not intend to be left out; she has big plans for her share of the spoils, first and foremost, getting far away from the nothing town she’s found herself stuck in.

But this is 1900, and Regina’s husband, Horace, controls the money and will have the final say in whether or not they invest in the mill. Horace is at Johns Hopkins in Baltimore, where he’s been diagnosed with a terminal heart condition, so she sends her teen daughter, Alexandra (Francesca Carpanini), to fetch him. Once home, Regina is sure she'll convince him to invest in the deal, securing their future millions.

Scenic designer Scott Pask crafts a decadently realistic set. Though the primary action takes place in the drawing room, winding staircases lead to unseen upper levels, doors open to a decked out dining room, even barely seen halls stretching off into the wings are decorated with care. Along with Jane Greenwood’s costume design, it's easy to sink into the play, which, though two and a half hours long, passes swiftly over sharp dialogue and growing intrigue. Sullivan commands a fluid ensemble performance, stretching great drama out of heated arguments and pregnant pauses alike. (One scene in which the Hubbards impatiently stand by as Horace drinks a glass of water is particularly memorable.)

Michael McKean, as eldest brother Ben, and Linney are worthy adversaries in a constant chess match, their lightning repartee shifting imperceptibly between disdain and admiration. Linney is incisive and compelling as Regina, an ambitious woman bound by the laws of men. She is Hellman’s truly complex character, so much so that she makes certain others feel flat in comparison.

For her part, Nixon commands a major performance out of what turns out to be a small role, Birdie, an aging southern belle, abused by her husband Oscar (played cruelly by Darren Goldstein), money hungry and mean, and disappointed by her son, Leo (played smarmily by Michael Benz), equal parts rogue and buffoon. Nostalgic for the past and unfit for the present, she turns to alcohol. She finds comfort, however fleeting, in the companionship of the somewhat self-righteous Horace and somewhat cloying Alexandra, whom Birdie fears is doomed to follow in her footsteps. Perhaps in part because of the marketing of the play, Birdie felt like a red herring; Nixon was so delicate and pained, and drew the attention of the audience so thoroughly whenever she was on stage that I kept expecting her to come back, and factor more heavily into the outcome of the play.

There are any number of reasons to lavish praise on the production, and many have, but it feels like a stretch to call show timely. On the contrary, it feels a bit antiquated, sympathy for Birdie’s old south sentiment and static, subservient black roles (not for any lack of skill or character by Caroline Stefanie Clay as Addie or Charles Turner as Cal) don't hold up too well under scrutiny.

In 2017, The Little Foxes feels a little bit like elderberry wine and tea cakes in the afternoon — a superfluous indulgence, but an intoxicating, transportive treat, nonetheless. With two such skilled actresses at the helm, you’ll likely be tempted back for a sweet second helping.