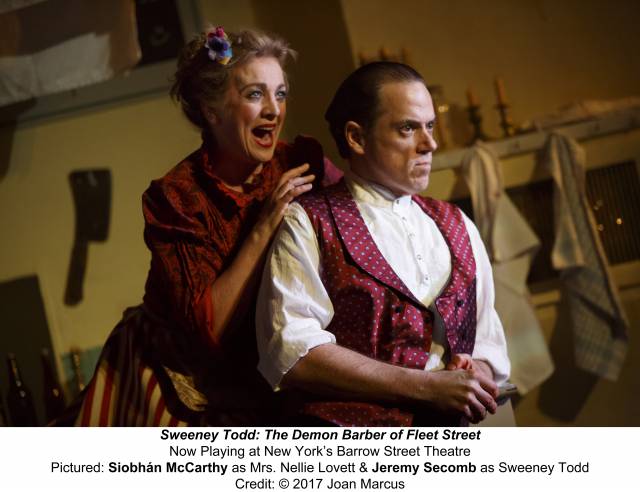 Sweeney Todd, arguably one of the darkest pieces in the musical theater canon, becomes darker yet in the fantastically staged new production from the UK’s Tooting Arts Club, performed at Greenwich Village’s Barrow Street Theater. The entire space has been converted to resemble “Harrington’s Pie and Mash Shop,” a real eatery in Tooting, London, which has been standing, according to the program, since 1908. The set is a complete replica of the London shop, where the production debuted, and audience members who want to fully immerse themselves can sign up in advance to actually enjoy pie and mash in the theater (if we can still call it that) before the show.

One would be deceived to think that this slightly gimmicky environment degrades the shows integrity in any way. Rest assured that the show is left completely intact, and delivered with skill and finesse by an excellent team of actors and designers. Bill Buckhurst’s establishment of an immersive environment is smooth, subtle, and extremely masterful. It is perfectly paired with Georgina Lamb’s choreography, which brings the actors everywhere from on top of the tables where the audience sits to the lobby, where they are herded back from intermission, and squarely into the faces of unknowing clientele, often bearing a razor in hand. The cast is unanimously excellent, and includes a mix of British actors, who have been imported from the UK production, including Siobhan McCarthy (Mrs. Lovett), Joseph Taylor (Tobias), Duncan Smith (Judge Turpin), and a wonderful Jeremy Secomb (Sweeney Todd), as well as some American staples: Alex Finke as Johanna, Betsy Morgan as the Beggar Woman and Pirelli (an unexpected but successful pairing of roles), Brad Oscar as the Beadle, and the always excellent Matt Doyle, who brings a beautiful richness, innocence, and strength to his portrayal of Anthony. The cast worked beautifully as an ensemble, delivering a rich, vibrant sound, and lending themselves nicely to the immersive elements of this production.

Secomb’s job is particularly difficult, and not just because he’s playing the titular character, and one who is quite a handful at that. Unlike other incarnations of Sweeney Todd, in which Todd’s darkness, anger, and intensity, and vulnerability are conveyed from behind the safety of a a barber chair and in a typical proscenium theater, in this production, not only is Todd at the same physical level as much of the audience (sometimes murdering his victims mere inches away from the front seats), but he interacts with us, yelling out of nowhere directly into someone’s face, or staring them down for what seems like several minutes. I imagine that it is a delicate balance to break the fourth wall so explicitly while remaining firmly planted in your character and your show, and it is something that Secomb and the entire production accomplish with complete expertise.

Interview: Betsy Morgan on the Challenges of Playi...
thEATer: John-Michael Lyles of ‘Sweeney Todd’ on H...
Thanks to Steve Earle, ‘Coal Country’ ...
Review: The Lighting Thief: The Percy Jackson Musi...