June 23, 2016
Theater Review
Review: On the Verge or The Geography of Yearning 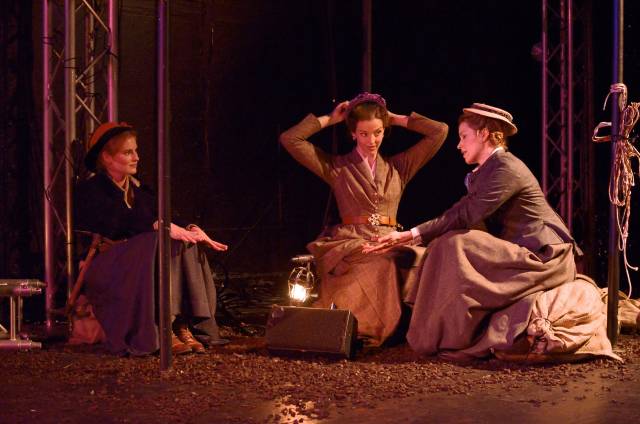 Eric Overmyer’s 1985 play On the Verge or The Geography of Yearning—revived by The Attic Theater Company at Walkerspace—follows three intrepid explorers from 1888, bushwhacking their way through Terra Incognita and turning up more than they bargained for. As their expedition progresses, Mary (Monette Magrath), Fanny (Emily Kitchens), and Alex (Ella Dershowitz) learn that they are advancing not just through space but also through time. They find themselves “osmosing” elements from future decades and pondering such mysteries as eggbeaters, airmail, and Velveeta. Should they embrace the new reality or merely try to accept it?

Why revive On the Verge now? According to program notes, artistic director Laura Braza long wanted to helm the play and was able to convince the company’s board members and donors that she should do so. It’s true that Overmyer’s scenario continues to provide a comic kick. But the play clearly functioned differently when postmodernism was a little less post. Without any updating from the playwright, the script’s now-31-year-old comedic anachronisms may be incomprehensible to playgoers not yet born in 1985. What will they make of allusions to Burma-Shave and Bebe Rebozo? And why, such customers may wonder, does the play’s version of the future not include such recent phenomena as coconut water, Tinder, and Nicki Minaj?

The women portraying the explorers are a talented and game trio, and they play well together. But the production may have worked better had older performers been cast as Mary and Fanny. (The script suggests that Alex is somewhat younger—or younger at heart, anyway—than her fellow travelers.) Both Magrath and Kitchens have some good moments, and Kitchens brings surprising and welcome emotional depth to a scene in which Fanny learns the fate of the man she left behind in Terre Haute. But neither performer fully captures the authoritativeness, smug self-satisfaction, and keen competitiveness of these seasoned adventurers. The casting issue may have been partly why—at the preview performance I attended—audience response was relatively short on laughs, particularly during Act 1. (Act 2 worked considerably better.)

Playing all the supporting parts in the production is the very funny William John Austin. He’s especially good in three roles: the otherworldly Mister Coffee (who may in fact be the Angel of Death), an aw-shucks 1955 teenager, and a smooth and cocky lounge singer.

Special recognition is due scenic designer Julia Noulin-Mérat, sound designer Beth Lake, and—especially—lighting designer Daniel B. Chapman, who help make the jungle-adventure sequences pulse with energy. At points the whole set glistens, in part thanks to an effect that (if I observed correctly as I crossed near the stage) was created from the play of light on strips of magnetic tape blended into the layer of bark chips that covers the stage floor.