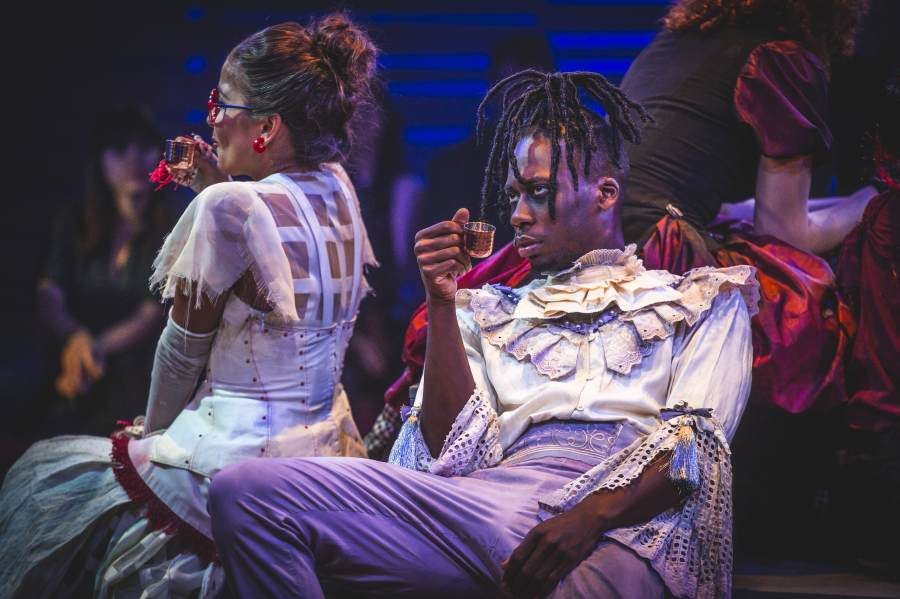 Whiskey Pants: The Mayor Williamsburg, a new musical directed and composed by Christian De Gre, is a remarkably silly new work, now up at the HERE Arts Center. And while some of the silliness leaves something to be desired, a lot of it is at the beating heart of Whiskey Pants, ultimately a very hardworking production.

In this piece, we find ourselves in post “the event” Williamsburg, Brooklyn, where the mayor is decided by an annual whiskey drinking contest and goes by Whiskey Pants. The current longstanding Whiskey Pants has a young daughter who wants more for her life, and a son who has returned to Williamsburg to see if there is any life for him here. Throughout the musical, an energetic ensemble helps tell the story and interacts with the spectators.

Whiskey Pants is certainly stylized, with psycho-Wild West art and costume design. It would have been fun for the text to follow this path as well, but in general it stayed with the clear choice of explicating the character dynamics and story. Perhaps this went a little far, and we could've done with more of ‘what's going on in this world?’ and less of ‘who was Mayor Whiskey Pants' former wife?’.  The piece also seems to hint at cultural commentary, but in the end chooses to be a love musical in a silly setting. It's a very fair choice that does leave the scent of a joke the house doesn't totally get, despite the fact that we should get it and we want to get it.

Still, the show does give Tony Mowatt, performing as the Mayor, ample opportunity to show off his impressive pipes. And the ensemble could for sure sing. Eric Michael Parker, as the ensemble's drunk Matthias, stood out, holding down the higher male register and winning the hearts of every spectator in his section. Each ensemble member gave free whiskey shots and hung out with a section of the house before the show; not bad, mate.

At no point in Whiskey Pants one can escape the absurdity of it all. Belching -- wait no -- belting about whiskey drinks, numbers about drinking at noon; the work is fun, and while there are just a handful of jokes, the experience is a jovial one with a shot or two of the dramatic. Though a greater foundation would've done wonders for the piece, there’s still a ride of a time in Williamsburg Whiskey Town.

Whiskey Pants: The Mayor of Williamsburg