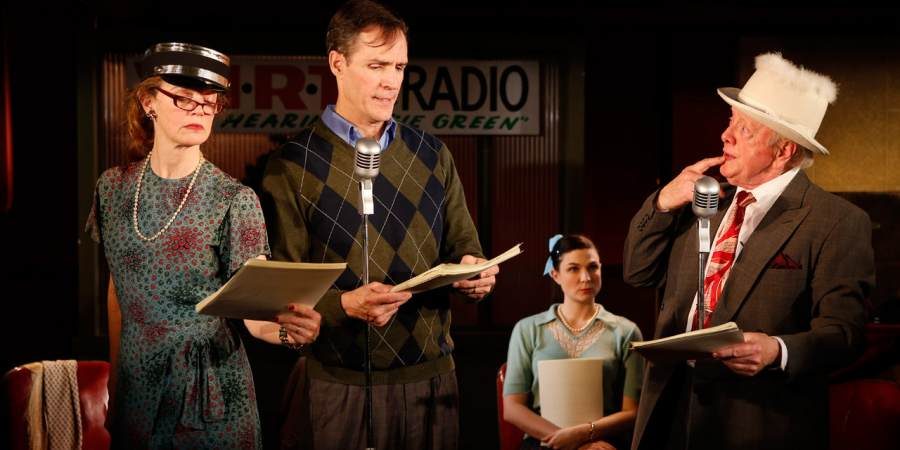 If you're looking for a delightful little Christmas show with a good dose of old-fashioned charm, the production of It's a Wonderful Life currently playing at Irish Repertory Theatre fits that bill. Directed by the competent Charlotte Moore, this production isn't likely to pull any major surprises, but in spite or perhaps because of that, it still succeeds.

When, on Christmas Eve, George Bailey finds himself facing arrest for the loss of $8,000, he decides it would be better for everyone if he'd never been born. It's up to George's guardian angel, Clarence, to save George from suicide by convincing him that he really has a wonderful life.

The Irish Rep production is played as a live radio show, which means an applause sign prompts the audience to clap at appropriate moments, and the show is peppered with sly 1940s-era commercials. It also means Rory Duffy as the SFX Artist single-handedly (and entertainingly) pulls off a slew of sound effects - like crunching shoes in corn flakes to imitate footsteps in the snow - while also performing as various characters. Impressive, that.

With the exception of Aaron Gaines (a fitting George Bailey), each member of the six-person cast juggles two or more parts, usually with simple props like a hat or shawl to signify different characters. Of these, Dewey Caddell provokes the most laughs via his spot-on imitations of Mr. Potter and other characters from the film. While I wouldn't expect or want the whole cast to just replicate the movie, I found Caddell's vocal acting hilarious (he also plays Clarence, Mr. Gower, and others). Haley Bond is winsome as Mary Hatch Bailey, George's loyal wife; and Ian Holcomb and Orlagh Cassidy play a dizzying number of parts without dizzying the audience.

Anthony E. Palermo's adaptation follows the Frank Capra film closely, often verbatim - though some minor deviations have been made to cater to a radio platform, and some scenes have been cut in the interest of time. The heart of the story is still here, and since it's a winning formula, it would probably take some conscious effort to really mess up any production of It's a Wonderful Life.

Of course, with such a fine cast and such inspired direction, there's little chance of that in this delightfully streamlined performance. Whether you've seen the film 100 times or only one time, you should find plenty to love in this radio show adaptation. Like a serving of your favorite comfort food, It's a Wonderful Life - The Live Radio Play hits the spot. And Christmas is the perfect time for this warm, wonderful type of show.

In Queens at It’s a Wonderful Life