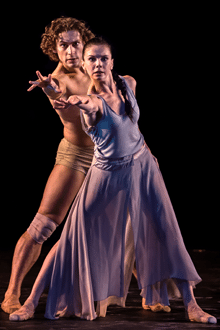 Solo For Two, a presentation of three dance works at New York City Center, featured a few of the most gorgeous creatures of the ballet world: its stars, Natalia Osipova and Ivan Vasiliev, as well as Edward Watson, Elizabeth McGorian, Donald Thom, Tomas Mock, Marcelino Sambe and Vladimir Varnava. To be clear, this was an evening of ballet, yes. However, the audience of New York City Center was also bestowed another much rarer gift: the art, intrigue and joy of Russian clowning.

The evening started with a smoldering and intensely moody piece called Zeitgeist, choreographed by Alastair Marriott to music by Philip Glass and featuring Natalia Osipova and Edward Watson in the lead roles.  Watson brought his characteristic larger-than-life radiance and artistry to the work; with Osipova, he creates a dizzying mix of exotic intoxication and unusual elegance. Vladimir Varnava’s Mozart and Salieri then heralded a stylistic shift in the evening -- from modern ballet into the often uncharted waters (in NYC, that is) of clown theatre. The piece explores the relationship between the two composers, with Ivan Vasiliev embodying the more talented Mozart and Varnava conveying the intense complexity of Salieri's emotions.  The piece is staged with an astute mix of straightforwardness, idealized romanticism and brilliant clowning. Some sections could do well with a slight trimming (such as the beginning bit and a section where glass jars are slid back and forth), but the overall spirit of this piece is haunting, jarring, highly theatrical and just as bittersweet as the historical relationship of the two artists.

Lastly, choreographer Arthur Pita brought us one of the most engrossing, hair-raising and thrilling dances I’ve seen. His Facada is a tale of a woman left at the altar (Osipova), her groom (Vasiliev), and her ridiculously beautiful mother (Elizabeth McGorian). McGorian, a character artist with the Royal Ballet, is a breathtaking and witty presence onstage; the character she plays is a work of art in body and stage personality - funny and frightening all at the same time. Osipova, as the poor little bride, dances with even more violent beauty and unbridled passion than usual. And Vasiliev, as always, brings his whole heart and humor to the stage as the jerk boyfriend; he has a rare ability to relate personally with an audience, as if face to face, his expressions as audible as an opera star's voice. Musician and composer Frank Moon’s live performance is marvelous, punctuating this story with a beat that loops in one's head long after the show is over.