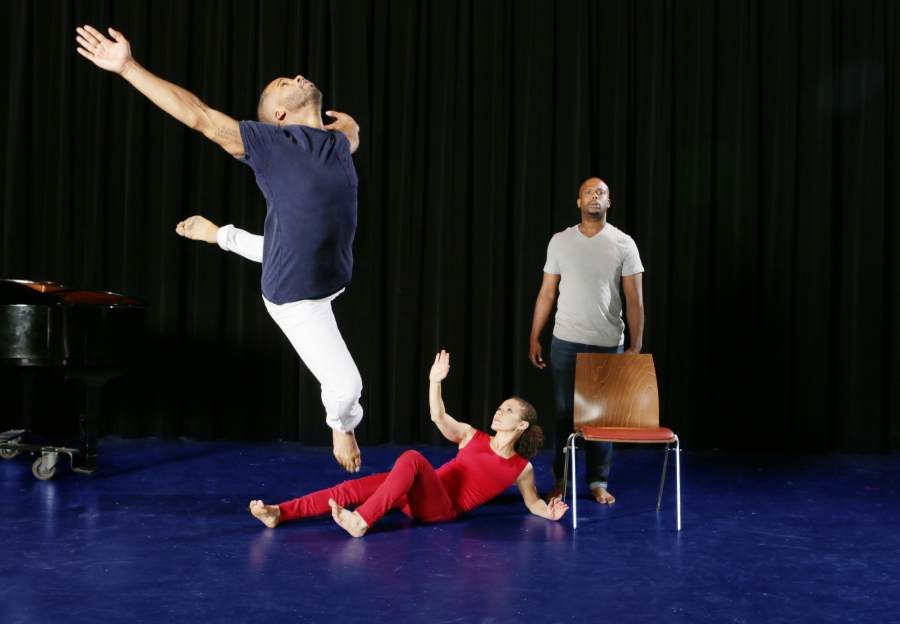 Dixon Place is hosting a really great, totally passionate, very well crafted and well developed performance in Chesney Snow’s The Unwritten Law, directed by Rebecca Arends. It is the story of Snow's family history and cultural history, told through his choreopoetry with two super high-quality dancers dramatizing the events besides him.

Snow tells the story of his family, in a nation of opportunity but plagued by deep racial oppression and segregation, and how he overcame the burden of this history yet still faces it everyday. From Jim Crow, through the 1980s, and up until today, Snow, through his lightly rhymed spoken-word melody with a cello and piano accompaniment, relates striking and moving events from his personal and family history with genuine optimism and sincere depth. He is an apt storyteller, but it is his passion that resonates.

The movement element of the work, performed by Arends and Winston Dynamite Brown (Maleek Washington will take over the run henceforth), draws attention because it’s physically so impressive, but infrequently communicates beyond dramatization. So it’s wild entertaining, but doesn’t contribute to the meaning of the work. This would hold back some plays, but Snow is engaged with the work, and because he is somewhat loose himself as an orator, the A+ movement is kind of a nice alternative to all the talking.

The Unwritten Law bills itself as choreopoetry, has three performers on stage, but functionally works as a solo show. It fits rather comfortably into the form and content of solo works as well. And it is so refreshing to see a solo performance with a shape, a matured piece of theater. Most solo performance feels like a first draft, so moments of inspiration are clear, but the works do not drive, do not do anything but present raw energy and text. Alongside his passion for the subject and the super strong dancers, the structure of The Unwritten Law was the most impressive part of the evening.

One of the early images of the work, projected onto the back wall, is of a lynching, which Snow relates was turned into a postcard. The last image of the work is Snow being accosted himself, brutally and improperly, by four police officers. To weave the legacy of black Americans unrighteously terrorized so seamlessly, and notably softly — not to undermine the assaults but to ingrain them into the story — allows these themes to attach themselves to Snow’s story that we are already feeling with.

Snow's call to action — to confront inequity, to unwrite the burdens that hold you down, and to honor your story — is persuasive because he’s earned it. Because his play has structured growth, clear avenues of engagement, and developed images, the final passionate call feels justified and buttressed. It’s a great lesson for all solo pieces, and I hope many solo artists come out to see it.

In Manhattan at Dixon Place Theatre