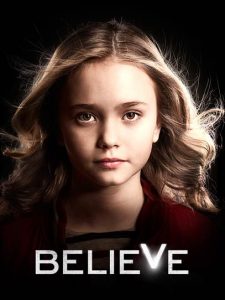 Levitation, telekinesis, the ability to control nature, see the future... since she was born, Bo has had gifts she could neither fully understand nor control. But now that she is 10 years old, her powers have become stronger and the threat from malevolent forces that would use her abilities to control the world has grown more dangerous. With her life and future in jeopardy, Bo's protector, Milton Winter, turns to an unlikely source to keep her safe - Tate, a wrongfully imprisoned death row inmate who's lost his will. Tate and Bo begin an extraordinary journey, one in which trust must be earned. On the run and traveling from city to city, every place they stop and everyone they meet will be changed forever. But they'll have to keep going to stay one step ahead of the sinister forces after Bo's power... because it will take a miracle to keep them safe forever.

Thanks to its generic title, you'd be forgiven if you missed this week's premiere of NBC's newest drama. But given the collision of two titanic talents behind the scenes, it's a show worth checking out. The supernatural drama is produced by J.J. Abrams, whose production company, Bad Robot, now has four shows airing on three different networks (including "Revolution" also on NBC, "Person Of Interest" on CBS, and "Almost Human" on FOX). "Believe" may be his most promising new show since the sorely-missed "Fringe" dropped back in 2008.

The show's promise is due just as much -- if not more so -- to its creator, Alfonso Cuarón. You may have heard his name mentioned recently: he directed a little film called "Gravity", for which he just took home the Best Director trophy at the 86th Academy Awards. He both conceived of and wrote the show, as well as directed its first hour. And in the hands of an Oscar-winner, the very least you could say about "Believe" is that it was masterfully crafted. From the opening moments, when a camera whirls its way through a cramped car, tumbles dizzyingly through an accident, and tracks out into rain-drenched woods in one unbroken take, you know this is a Cuarón production. (The long shot is heavily reminiscent of a famous tracking shot from Cuarón's acclaimed dystopian film "Children Of Men".) Thankfully, the director knows from experience how to helm a fantastical tale while keeping the story grounded; the first hour of "Believe" is a soberly realistic affair.

If the directing is masterful, the writing is perhaps a little less so. In this day and age of heroes and mutants, we've all seen stories of young people discovering special powers before. The pilot of "Believe" hits a lot of familiar notes, including warring shadowy agencies, relentless assassins, and moments of superpowered strength. Thankfully, the stellar cast helps to elevate the material and keep the momentum building even through the more clichéd beats. Jake McLaughlin ("Savages", "Safe House") stars as Tate, a death row inmate broken out of prison and tasked with protecting Bo, the special girl in question. Casting child actors is always a tricky business, and a wrong choice could have doomed "Believe" before it even began. Miraculously, the casting director found Johnny Sequoyah, who is precocious without being grating, cute without being cloying, and an all-around delight to watch. McLaughlin and Sequoyah have terrific chemistry, which is strange to say about a grown man and a prepubescent girl, but the two play off each other remarkably well. The adult criminal/child prodigy relationship is a dynamic not often explored on television, and is the single strongest asset in the show's arsenal.

Hopefully Cuarón can depart satisfactorily from the well-trod path of the genre he's chosen, and hopefully the craftsmanship behind the show will maintain its high level as Cuarón passes the baton to less famous directors. The biggest mystery surrounding the show isn't where Bo's superpowers came from, it's: What will the show look like after the pilot? Will it be a mythology-heavy show? A case-of-the-week format as Bo helps a different poor-lost-soul every week? That remains to be seen, and may make or break the success of "Believe".

Tweet us @Stagebuddy and let us know what you thought about the "Believe" premiere!