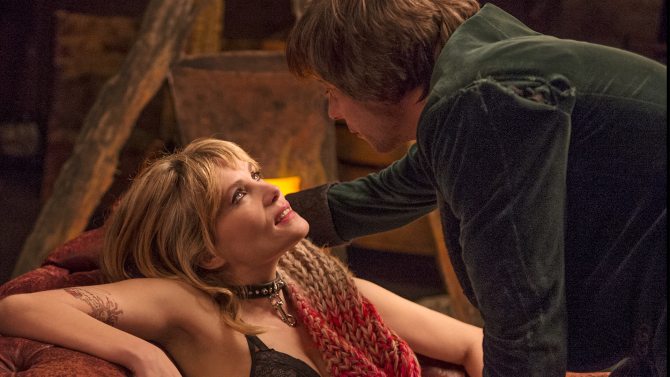 Roman Polanski will never not be a controversial figure. Whether it's his personal history or his artistry in general, there will always be detractors and supporters. For the detractors, it may be easy to dismiss the director's latest effort, "Venus In Fur", having its American premiere tonight at the Tribeca Film Festival. The film is an adaptation of a play by David Ives, which ran on Broadway in 2011 (starring Hugh Dancy and Nina Arianda), and which is itself a loose interpretation of the 1870 novel "Venus In Furs" by Leopold von Sacher-Masoch (the book that is singlehandedly responsible for coining the term sadomasochism). Polanski critics and purists alike will likely approach "Venus" with caution, given that it bears so much in common with his previous film, "Carnage" -- also an adaptation of a Broadway play with a small cast of characters and a claustrophobic one-room setting, which was received lukewarmly. But fear not: "Venus" is a much more assured piece of art than "Carnage", it features two absolutely stellar performances, and it's the director's best film in years.

"Venus" tells the story of a playwright and the woman auditioning to portray the lead character of his new play. Their interactions occur in one space -- the auditorium and stage of the theater -- in real time over the course of 90 minutes. In that time, they examine such topics as sex, power dynamics of men vs. women, and, of course, sadomasochism. The source material is fantastic, and while Polanski can't take any credit for that, he can take credit for having a terrific grasp on the subject and its many nuances and subtleties. Mathieu Amalric ("Quantum Of Solace") plays the playwright, Thomas, whose interest in the sadomasochistic themes of his own play belies his nebbishy exterior. Polanski's own wife Emmanuelle Seigner portrays Vanda, the woman auditioning for the part of Wanda von Dunayev.

The knowledge that Seigner is married to her own director may prejudice some against her role in the film, but in truth, she's spectacular. She may be a bit too old for the role (part of the unbalanced power dynamic in the original play is the ten-year age gap between the writer and the actress), but in every other respect, she's an unmitigated triumph. She unquestionably has the harder task of the two actors, having to constantly flit back and forth between flustered, profane Vanda and the collected, sensual Wanda of the play. As she starts slipping in between the script and real life with more and more frequency, the lines between her two roles begin to blur. It's a slow and seamless transition that's fascinating to watch.

Polanski himself has done an excellent job of crafting an engagingly exaggerated mise en scène. Obviously, since the film is an adaptation of a play that is itself about a play, there are inherently theatrical elements to it. But instead of trying to cinematize everything, Polanski embraces the heightened reality of this world and uses it to his advantage. There are plenty of Polanski trademarks on display here: the claustrophobic atmosphere, the sense of isolation, the sudden eruptions of violence; but in "Venus", they're blended with such appropriately melodramatic elements as stark lighting, affected staging, and a whirling dervish of a score by Alexandre Desplat. In Polanski's hand, the film becomes a sort of twisted pas de deux, with the two actors dancing around each other in ever tightening circles. Over the relatively brief 90 minutes, the director effectively tightens the screws on his film, blending the line between reality and fiction, until the audience is as confused and as fully in Vanda's manipulative thrall as poor, bemused Thomas.

In what's perhaps an unintentional meta-commentary on the collaboration between the artist and his muse, "Venus In Fur" itself is as wholly successful as the events depicted in the film are wildly disastrous.