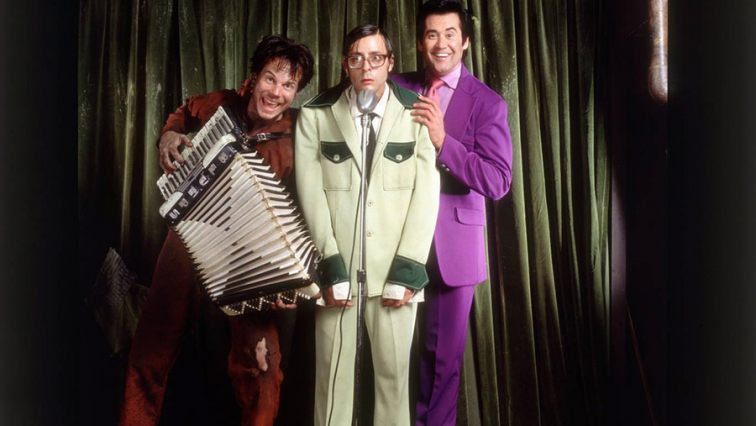 The Alamo Drafthouse in Brooklyn will screen Adam Rifkin’s The Dark Backward as part of their Weird Wednesdays series on 01/31. We spoke to the director about his inventive neo-noir, working with the late Bill Paxton, and his love of film.

You’ll be featured in Weird Wednesdays at the Alamo, is that an accurate adjective to describe The Dark Backward?

I love it! [Laughs] I knew when I wrote and made the film that it was a little weird, so this is very fitting. What’s more exciting to me is that it’s playing at all, I made it a long time ago, and the fact people watch it and it’s developed a cult following is very flattering. I’m humbled when people

I watched The Dark Backward at home, but obviously movies are better on the big screen, can you talk about some of your favorite moviegoing experiences?

I’m thrilled anybody sees The Dark Backward in any context, but the collective audience experience is very satisfying to me. I guess you can say that about most films, I love movies and prefer to watch them on the big screen to share the experience with those around me. Audience reactions are contagious, scary movies are scarier, comedies feel funnier. One of the most vivid experiences I had with that was watching a re-release of Rear Window when I was in high school. There’s a moment in the film when Grace Kelly’s character has snuck into the apartment across the courtyard and has stolen Raymond Burr’s wife’s wedding ring, as the police have arrived to question people. Jimmy Stewart is watching through his camera lens from across the courtyard as Grace Kelly gestures for him to see the ring. You see Jimmy’s POV and then you see him look to discover Raymond Burr, and then he looks right into the camera...the audience screamed! The reaction to a movie made over 60 years ago was so exciting.

I love you brought up Rear Window, because in LOOK both the movie and the series you explored voyeurism that would’ve made Hitchcock salivate.

[Laughs] LOOK was very inspired by Rear Window, we’re all voyeurs and that’s what I wanted to explore.

All your interests make it hard for critics to be like “oh this are the themes he’s interested in.” I guess if there is a theme in your films it might be moviemaking itself, not only in things like Giuseppe Makes a Movie but even the screenplay for MouseHunt which has some incredible setpieces.

I like your assessment. I absolutely feel that there is a theme of moviemaking in my work. I can’t help it, it seeps into everything I do. Growing up I couldn’t get enough of documentaries and books about how movies were made.

What kind of games did you like playing as a kid?

I made movies with my friends, I used my dad’s home movie camera and used my friends and siblings till they got tired of it. I always knew I wanted to make movies, and growing up in Chicago I knew I’d move to Los Angeles and make movies there, in the meantime I’d make them at home. What I didn’t know at the time was that I was teaching myself the principles of real filmmaking, because Los Angeles filmmaking wasn’t very different from mine,

And in a way by making independent films you’ve been able to maintain the playfulness you had as a kid probably.

That’s true. I’ve been very lucky in that I’ve had creative freedom in all my movies, it’s been like playing in a giant sandbox. I haven’t experienced the horror stories I’ve heard about being oppressed by corporations.

Can you share some memories of what it was like to work with Bill Paxton in The Dark Backward?

Bill was the greatest guy of all time. Everything you thought you knew about him by watching his work was true: he was that nice. He was fun, funny, generous, he was the best guy. We became very close after working together, his performance in Backward is larger than life and he was so frustrated he couldn’t go even bigger. He was so funny, he kept trying to make the character bigger. I don’t think anybody else could’ve played that role, only Bill could be this big but also real. Bill also loved movies, Hollywood history, so he and I bonded through our love of old movies. I never thought Bill would die.

Backward is very noir-ish, except for it being in color, was film noir at the back of your mind when you made the movie?

One hundred per cent, in fact our intention was to shoot it in black and white, but nobody would allow us to make it that way. The look of noir was at the forefront of my mind, the nihilism and philosophy as well. I wanted the film to feel gritty, so we decided to embrace color in a bizarre, carnival way.

In terms of “universes” you easily travel within the same structures in different mediums. What appeals to you about exploring the same characters and ideas in movies and television?

Somewhere deep down I have archetypes I keep exploring. Nihilism, helpless characters, for instance, are themes I explore. I guess a therapist would say I’m trying to work on my demons onscreen. I have things I can’t escape, like those themes and mixing comedy and drama, I think comedy and tragedy go well together which is something I’m often criticized for.

Is there one elusive unicorn of a movie that you’ve never been able to watch on the big screen that’s on your bucket list?

It’s not just on my bucket list, but I wanna see the Jerry Lewis film The Day the Clown Cried, if I can see that for the first time on the big screen I’d be in art heaven. Maybe someday we’ll all get a chance to see it.

Interview: Orchestral Conductor Ryan McAdams on th...
Interview with Imelda Staunton of ‘Finding Y...
The Shots That Won These Classic Films Their Best ...
Interview: From ‘Hamilton’ to Bollywoo...