November 22, 2013
Film
Director Rohan Spong on "All The Way Through Evening"

"All The Way Through Evening", by Australian filmmaker Rohan Spong ("T Is For Teacher"), is a musical documentary about the HIV/AIDS crisis in New York City.  The film focuses on a small group of people -- specifically, composers in NYC's East Village -- and on the efforts of one woman, Mimi Stern-Wolfe, to honor their memory by producing an annual concert of their works.  It's an affecting piece of cinema that, by examining a specific community of close friends, manages to capture the wide-ranging scope of the epidemic.  It's also a testament to one woman's unflagging dedication to her lost loved ones.

We got the chance to chat with Mr. Spong about his film, his thoughts on the AIDS crisis, and his admiration for Ms. Stern-Wolfe:

StageBuddy: As an Australian, what prompted you to make a film about the HIV/AIDS crisis in New York City?

Rohan Spong: I’ve been spending blocks of time here for four or five years, and like a lot of people, you have a slight sense of ownership of NYC even when you’re not actually a New Yorker.  I met Mimi Stern-Wolfe when I was here promoting another film, and as a result of that chance meeting I began learning about that period of time. I didn’t really learn about that in high school, it's not really in the history books.  But I thought Mimi was a great vehicle for that story.  Maybe it was just an excuse to spend a lot of time with Mimi, there’s definitely an element of that.

SB: You've previously made a film entitled "T Is For Teacher" about four transgendered teachers in the United States.  Something about the plight of minorities in America clearly interests you.  What is that?

RS: On paper, these films would be depressing, but ultimately they’re about how great we can be as human beings.  They’re about optimism and the celebration of the human spirit.  I’m attracted to these stories about people that are -- the phrase that I’ve used a lot is “swimming against an unfair tide” -- people that the audience roots for.  I’m in NYC at the moment shooting another film about elderly dancers.  It’s going to be slightly more upbeat than my other two films, but it’s also kind of about people striving against adversity.  Perhaps I identify with them because it’s so difficult to make a film.

SB: Did you initially approach the subject of AIDS in New York wanting to explore musicians specifically, or did music emerge during your process as the best means of telling the story?

RS: I’m too young to remember that period of time.  I was born in 1981 and I certainly don’t remember it being on the news.  But I kind of found that the music spoke to me, and I don’t really have any form of musical training, but this music is actually really moving.  There are a couple of pieces in the film...I get a little bit teary, they’re quite powerful pieces of music.  It allowed these men a voice in the film. 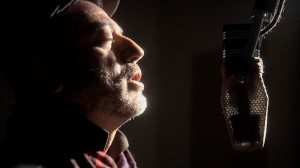 SB: There's something about the juxtaposition of such beautiful music next to stories of death that is particularly poignant.  What mood were you hoping to evoke with that?  A mourning of senseless death?  A celebration of life?  Something in between?

RS: I think at the end of the day, the issue of AIDS is present in the film, but in many ways it's also a celebration of Mimi.  She makes art for all the right reasons, and she does everything because she has a very left-wing political sensibility and she’s really quite lovable.  It’s quite a struggle for her to be putting on a concert of this scale and quality at this time in her life, and yet she manages to do it against all the odds.  It’s really beautiful to see all that come together.  It’s as much a documentary about putting on a show as it is a documentary about HIV/AIDS.  Different audience members get different things out of it.  I've heard young people say, "I had no idea the scale of this tragedy," and I've heard older people say things like, "Isn’t she the model human being, what an inspirational figure."

SB: In one memorable moment, one of your subjects likens the experience of living through the AIDS crisis to surviving a war.  And yet, in many ways, the AIDS crisis has faded from public consciousness in a way that, say, World War II has not.  Why do you think that is?

RS: I can only guesstimate.  Because the bulk of people regarded HIV during that period as associated with the LGBT group, and they weren’t the most popular group at that time in history.  I think there were a lot of negative things that were said.  But I also point my finger at terrible leadership in terms of an unfolding health crisis of such a massive scale.  History hasn’t really recorded it because there wasn’t any government policy made in any appropriate manner.  In Australia, when HIV emerged, the politicians were very proactive, we had a health minister that responded accordingly, we had advertising campaigns running 24/7 that were very effective.  The poor handling of the crisis speaks volumes about the government in this country at that time.

SB: On the other side of that same coin, AIDS is no longer the epidemic it once was.  People can now live long, relatively healthy lives with the disease.  Why do you think it's important for people to remember that part of history?

RS: This film was made at the same time as a lot of others about the same subject, and my film is the last one to come out.  "Act Up!", "How to Survive a Plague"...there were a whole bunch being made at the same time.  When we have a whole generation of people who remember that period of time and they start to get older, it’s important to remember the scale of that loss.  So I guess part of that recording of history is to remember and to have a look at the reasons why the crisis happened, at public health policy, at the various forms of activism that took place during that period of time.  Mimi’s is perhaps a quieter form of activism than others, but it’s no less important. 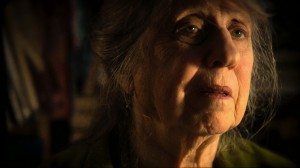 SB: "All The Way Through Evening" is as much about Mimi Stern-Wolfe as it is the AIDS victims she's honoring, and yet little is revealed about her background other than that her parents were immigrants.  What do you think has driven Mimi to devote her life to the memory of these men for 20 years?

RS: Mimi's a lover of real music, she’s a community-minded person.  She lost her closest friends and collaborators, all of those things are kind of the cornerstones of her activism: it’s about memorializing the people from her community, but it’s also about honoring those friendships.

SB: In Melbourne, your film ran for thirteen weeks -- longer than some big-budget films, like "The Hobbit".  How do you react to such an overwhelming reception in your home country?

RS: I was recognized on public transport, which was really fun, because the majority of people who recognized me were people who had read articles about the film in the newspaper.  That was really, really lovely, I didn’t anticipate that.  It’s a very small film, a one-man-crew film.  It was not made with a very big budget.  I didn’t anticipate that it would garner as much press as it did, and I was very flattered and surprised by the reception.  There was no money to do advertisements, we couldn't afford to do that.  It became a word-of-mouth hit.  People saw the film and told each other about it, which to me speaks very highly of our cinema audiences.

SB: Conversely, your film premiered in the East Village on World AIDS Day in 2011 and has since played at a few festivals in the United States, including winning the Special Jury Prize at the NYC Downtown Film Festival, but it hasn't seemed to find its footing here in the way it did in Australia.  Has it been a struggle to get American audiences to embrace this film?

RS: When people here see it, they love it.  It’s just much harder in America to get such a small film any air time or column inches.  It’s just a much more difficult scenario than in Australia.

SB: So what advice would you give to other aspiring low-budget filmmakers in America?

SB: The film ends on a somewhat ominous note, with mention of Mimi's declining health and the question of who will continue to honor these men after she's gone.  Do you see this film as your way of continuing her legacy?

RS: I hadn’t really thought about it that way until articles started to be written pointing to it.  At the end of the day, the breadth and scale of the music Mimi has performed over the years can't begin to be represented in the film.  But I think it’s a really great way of getting a little bit of a window into the world of Mimi, even if it's not exhaustive.  People do respond to the film in a very emotive way that I think...when you’re sitting in an audience, there’s something about that group emotional experience that makes the whole job worthwhile.

"All The Way Through Evening" opens on December 6th at Village East Cinema (2nd Ave at 12th St).  Read our review of the film here.