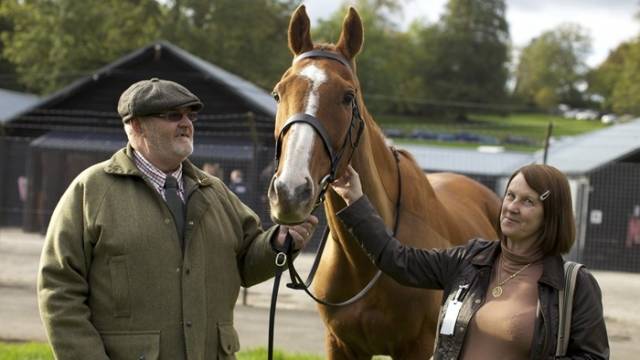 If you’re a dreamer, you’ll understand this: as odds increase, bigger miracles are required. Bigger faith, harder perseverance. Stuck in a Walmart-like job, woman with a dream Janet Vokes was the fuel behind the Welsh pub-based network that broke into the exclusive, expensive world of horse racing. While she might have possessed the grit and belief her companions lacked, once they got hooked into her dream, there was no turning back. This good-natured Cinderella-ish love story between a down-on-their-luck blue collared gang and their non-pedigreed horse is heart-thumping fun. Like most real-life love stories, there’s also peril and cruelty.

Janet Vokes and her husband Brian had bargained for a pittance a retired mare and mated her with an untried stud. The resulting foal was born and raised in a shanty allotment where chickens run free. He becomes a champion not only by rising from the ranks himself, but he stood for the little guy. Most of all, this horse called Dream Alliance— just watch him— he’s no ordinary horse. Both uncertain and majestic, he seems to understand there’s more at stake than nervous investments.

With everyone calling this the Rocky Balboa of horse racing, the thrills do come at a cost, to both jockey and horse. This elitist sport— far from refined— is not unlike entering a boxing ring and getting pummeled. The rigors and dangers of running over the various built-in obstacles, the formidable fences and ditches at high speeds, with little space between the horses— has led to falling, trampling and other traumas. Betting on horses is also a tremendous cultural phenomena that brings in huge revenues. While we get hints of this, the shadow side of the sport itself isn’t explored here. Dark Horse keeps the tempo buoyant— at the same time, you’re reminded of the odds.

Watching footage of Dream Alliance is breathtaking. One realizes that out of everyone backing him, that it’s Dream Alliance who perseveres. He’s the chariot that takes his supporters to places they’d never imagined. Sometimes the trajectory of what we wish for far surpasses our capacity or faith, and we don’t dare entertain that a carrot seed could ever become a garden. For the syndicate who risked the little funds they had to become part of something bigger than themselves, an unexpected romance blossomed. Dark Horse is the sort of film to egg us on in all our “impossible” dreams.