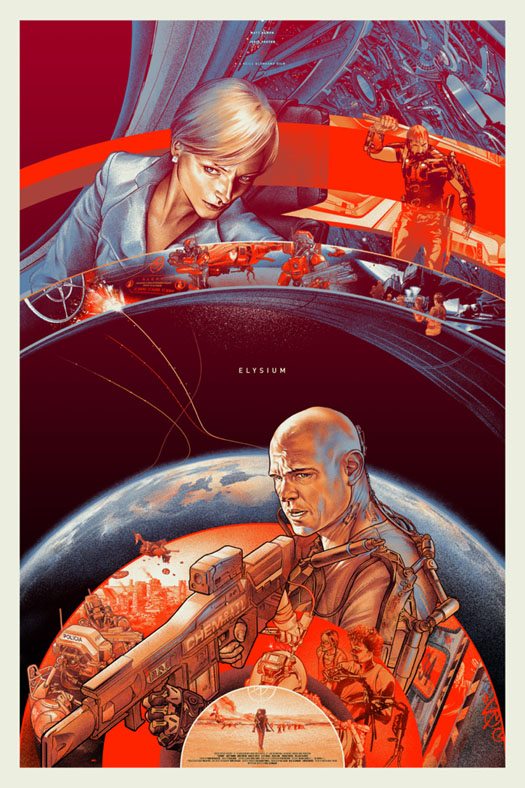 Summer 2013 will undoubtedly be remembered as the summer of blockbuster misfires.  "The Lone Ranger", "Man Of Steel", "The Great Gatsby", "Pacific Rim", and more: while none of these films were universally panned (with the exception of "The Lone Ranger"), they were all considered disappointments on some level by many moviegoers.  The light at the end of the underwhelming tunnel was "Elysium", the second film from Neill Blomkamp, the South African writer/director behind the brilliant Best Picture-nominated "District 9".  That film's incredible action, realistic documentary style, and timely allegory combined to make a near-perfect experience. It's all the more disappointing, then, that "Elysium" turned out to be as muddled and clichéd as it is.

When "District 9" came out in 2009, Neill Blomkamp was a first-time director who populated his film with unknown South African actors on a relatively small $30 million budget.  What separated that film from the rest of the sci-fi pack was its originality, in both its unique premise and its tackling of social issues ("Elysium" falls spectacularly short on both counts).  They say every story has already been told, but before "District 9", no one had seen a film about first contact where the aliens ended up marooned on Earth and imprisoned in slums.  It was simultaneously an allegory for apartheid, immigration and even transhumanism.  "Elysium", on the other hand, is headlined by Hollywood stars Matt Damon and Jodie Foster, and had over triple the budget of its predecessor, at a reported $100 million.  Everyone has seen a story about a dystopian future where a small portion of the population lives in extravagant wealth while the rest of us live in poverty and filth.  It's a tired idea made even more clichéd by the ham-fisted way in which it's handled.

Not even the design of Elysium, the space station the wealthy live on, is original.  While the effects are often breath-taking, the wheel design is lifted straight from countless sci-fi stories, most notably the Ringworld series by Larry Niven.  The exoskeleton mech-suit that Matt Damon dons has been seen before, most recently in "Pacific Rim", "G.I. Joe" and "Avatar".  The healing machines on Elysium are so inexplicably all-powerful that they're basically MacGuffins -- they might as well be the glowing briefcase from "Pulp Fiction".  The reluctant hero, the desperate mother, the maniacal mercenary and the domineering politician are all cardboard cutouts lifted from hundreds of other movies, with no unique characteristics to distinguish them.  Matt Damon and Alice Braga are fine if unremarkable as "reluctant hero" Max and "desperate mother" Frey.  Sharlto Copley, the bumbling lead from "District 9" is the villain of this tale, and his shrill, campy performance as a chaos-loving "maniacal mercenary" is lifted directly from dozens of more interesting bad guys.  Jodie Foster, surprisingly, delivers the worst performance of the film as the "domineering politician," with a bizarro French accent and the subtlety of a sledgehammer.  But the most frustrating part of the film is its allegory: it presents plenty of timely problems, but Max's plan (and Blomkamp's script) is never about finding a solution to those problems.  Instead, it exists merely as a cathartic take-down of the wealthy, which is both disappointing and unproductive.

All that being said, as much as Blomkamp fails as a writer on this film, he just as often succeeds as a director.  The effects are eye-popping, the action is creatively choreographed, and the contrasting visuals between the sepia-toned Earth and the gleaming Elysium are beautifully conceived.  He mercifully keeps the clichéd plot moving along at a quick pace (unlike other bloated bombs this summer).  Thanks to the direction, "Elysium" occasionally works as a run-of-the-mill sci-fi shoot 'em up film.  But from the writer/director of "District 9", it could have -- and should have -- been so much more than that.  Which makes the disappointment all the more crushing.