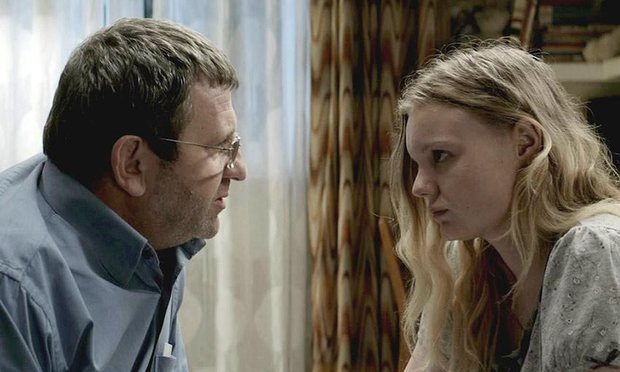 Graduation is an intricately detailed look at one man, through entirely good intentions, falling into an abyss of moral compromise. In the film's painstaking portrayal of one decision and its disastrous aftermath, director Cristian Mungiu condemns all of Romanian society, while not absolving his characters for their part in it. While it sometimes suffers for its predictability and somewhat arid tone, overall Graduation is a powerful look at the difficulty of maintaining personal morality in a corrupt culture.

Middle-aged doctor Romeo (Adrian Titieni) was a young man when the Iron Curtain fell and instead of pursuing opportunities abroad, he and his wife stayed home filled with hope, trying to help build a better, fairer Romanian society. Years later, that hope has curdled to bitterness and apathy, and with his smart daughter Eliza (Maria-Victoria Dragus) about to graduate high school, all he can think of is getting her out of the country. She’s earned a scholarship to Cambridge and while it’s contingent on her final exam scores, Eliza is sure to pass. That is, until the test day arrives and Romeo drops Eliza off a few blocks from school; while cutting across a construction site, she is assaulted and nearly raped, shaking her and putting her test results in jeopardy. Faced with losing the escape that he thought was a foregone conclusion, for such a terrible reason, Romeo forgoes his personal integrity and decides to tilt the wheel in Eliza’s favor, making a deal with a local fixer for a friend to grade Eliza’s paper and in return arranging a liver transplant for the fixer.

From this point, Romeo is trapped in a downward spiral, watching the dissolution of everything he’s worked for. Every individual decision Romeo makes is reasonable, but the audience can feel that he’s slowly sinking into quicksand. Romeo’s distaste for societal corruption leads him to view himself as apart from it, but once he succumbs, it’s clear how much he is enmeshed in the corrupt culture, as if it’s simply taken him a long time to discover it. Not only is Romeo’s descent into corruption spurred by good intentions, every false step is obscured by the euphemistic language people use to describe the corrupt acts – “helping people,” or “doing a kindness.” Eliza’s mother acts as a foil to Romeo, refusing to take part in anything impure, but he accuses her of selfish martyrdom and allowing their daughter’s chance to slip away.

There is an air of inevitability to the proceedings, which heightens the audience’s empathy for Romeo, but also removes most traces of excitement or intrigue. Graduation is a quiet film, with few voices raised or real confrontations. Eliza’s assailant remains unseen and both Romeo and the audience are denied the consolation of seeing a villain, leaving only Romeo and the diffuse system of compromises to blame. Graduation is a powerful moral lesson and while it’s about as fun as most moral lessons, its humane and meticulous portrayal of corruption is timeless and necessary.