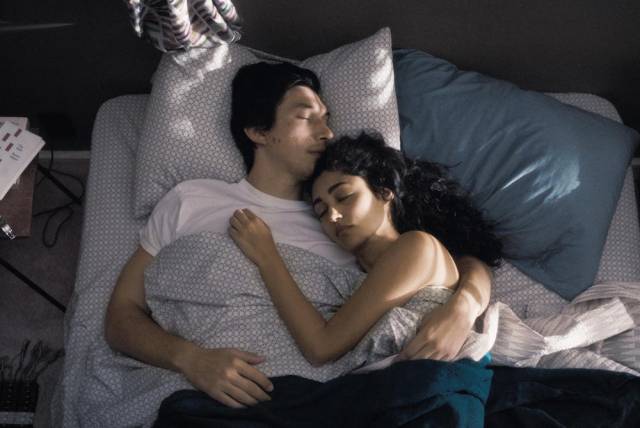 Proudly, gloriously out of step with mainstream film culture, Paterson is like an ambassador from a world where films are made free of commercial imperatives, indeed from a world where the shallow values of celebrity and wealth are replaced by the contemplative pursuit of art for art's sake. This wonder of a film from director Jim Jarmusch both portrays, and is an example of, finding beauty and truth in the mundane and unlikely.

Paterson doesn’t have a story as much as a scenario. Paterson (Adam Driver) is a city bus driver in the New Jersey city that shares his name. He lives with his wife Laura (Golshifteh Farahani), a free spirit who rapidly cycles through hobbies and has decorated their home in her own distinct black and white aesthetic. Every night, he takes their badly behaved bulldog on a walk and stops in for a beer at an old school bar, goes home, and gets up after six to drive the bus. And in his spare time, he writes poetry, working and reworking phrases in a cherished little notebook.

The film abandons the usual rhythms of inciting incidents and plot development for the slower and more meaningful rhythms of everyday life. There is a small tragedy at the end, somewhat allayed by a random act of generosity. Without an overarching plot, the film is a collection of closely observed moments and repetitions, through which Jarmusch is able to convey the rich texture of a lived life. When Paterson hears of his wife’s latest enthusiasm, whether it’s baking cupcakes or learning country-western guitar, the audience can clearly read in his face that he knows this interest might be fleeting and not a good use of money, but also that he loves his wife dearly and will support her with equanimity. Jarmusch is able to give relationships and encounters a depth lacking in other films, even if it’s simply a random conversation, as when Paterson meets a young girl who shares his love of poetry.

While the film isn’t really “about” poetry, it shows a great love for it and it’s a great pleasure to see Paterson rework his words onscreen. The setting was probably chosen in tribute to the great poet William Carlos Williams, another Paterson native and another man who went to work everyday (as a doctor) and wrote for himself, on his own time, and just happened to be good enough to be read around the world. One of the film’s most affecting scenes shows Paterson, at a low moment, walking to his favorite place to write and think, in front of the Passaic falls, and meeting a Japanese man who has traveled to Paterson in tribute to Williams. The possibility of this worldwide journey, inspired by decades old free verse, is one of the few reminders that the film is set in modern times, other than people repeatedly asking Paterson how he doesn’t have a cell phone. Jarmusch and Paterson have both chosen to remain outside of the mainstream, to ignore the dictates of both the marketplace and cultural observers, and look for beauty on their own terms. Paradoxically, by turning 180 degrees from what received wisdom would say makes a popular movie, Jarmusch has made a film that’s humane, understated, and could appeal to any adult with an open heart and mind.