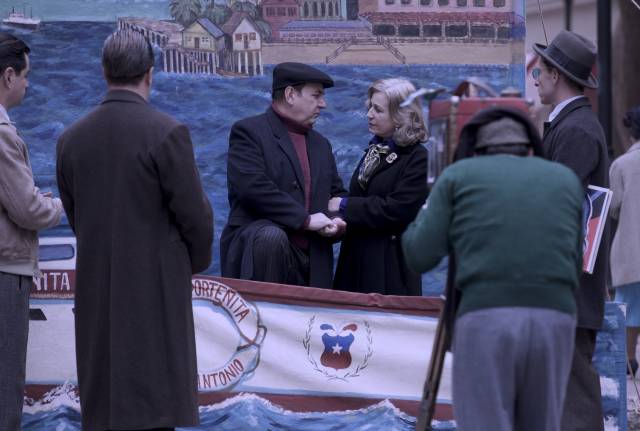 Pablo Larraín’s Neruda is a beautiful film and a bold challenge to the boring formulae of biopics. The flow of the film isn’t governed by facts and dates, but by moods and emotions, taking the audience on a dizzying journey through seemingly different worlds, united only by the presence of the great poet himself. Pablo Neruda (Luis Gnecco) is surely a difficult choice of subjects for the Chilean Larraín; a national hero, one of the most multifaceted men of the twentieth century, but most of all, a man who existed as much as a myth and a symbol as a flesh and blood man. Yet somehow, Larraín and the excellent Gnecco find a way to portray both the man and the myth with complexity and candor.

Neruda opens in 1948, with Pablo already established as a great poet and serving in the Chilean senate openly as a Communist, making him probably the most prominent Communist voice in the nation and also in the Western hemisphere. When the Chilean president, under American pressure, outlaws Communism, Neruda and his wife (Mercedes Morán) go on the run, pursued by police and aided by allies, ultimately seeking to leave the country. Here, Larraín plays his greatest trick, introducing Oscar Peluchonneau (Gael García Bernal), Neruda’s self-styled nemesis, who eventually becomes as major a character as Neruda himself, serving to refract Neruda’s influence on both the Chilean state and the hearts and minds of Chileans.

In his best work in years, Bernal creates a character who is somehow both threatening and endearingly clumsy, watching Neruda slip through his hands multiple times leaving behind personal notes to him written in police novels. Peluchonneau is essentially a bastard of the Chilean state (the product of the founder of the national police force and a prostitute, only recognized after the death of the elder Peluchonneau) and finds his loyalties strained as Neruda flatters his artistic side and exhorts him to “soar like an eagle.”

As Peluchonneau shows, the Chilean authorities fear Neruda because his words seem to act on the populace as strongly as fear of state power. Larraín shows Pablo Neruda as a man comfortable in both the Senate and in a whorehouse, whose political convictions derive from the same reservoir of passion as his love poems. The film is firmly pro-Neruda, though it does voice some doubts about his indulgent lifestyle in relation to his politics. It revels in sumptuous interiors and Chile’s natural beauty while using a bevy of techniques that make no effort to hide the artifice of the film. For all of the focus on Neruda, the film rarely tries to get inside his head or interrogate his personal psychology; rather, it tries to show the effect he had on other Chileans, from the President to ordinary citizens. Pablo Neruda existed at the nexus of art, myth, and history, and Pablo Larraín has made a film that draws equally from all three.