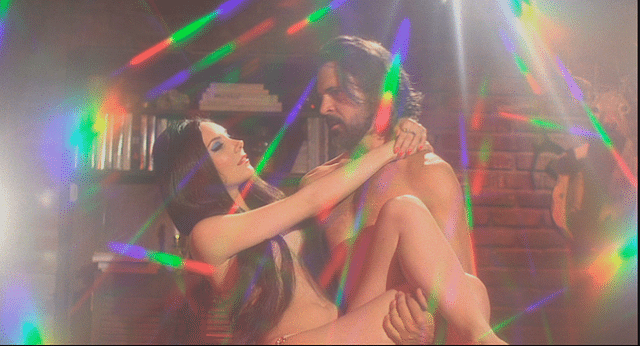 Other filmmakers have reproduced vintage film aesthetics, but seldom with as much brio and intelligence as writer/director Anna Biller in The Love Witch. Though there are fleeting glimpses of modern technology, Biller has crafted The Love Witch as a gorgeous Technicolor homage/parody of exploitation films of the 1960s/1970s, putting the conventions of those films in service of a more advanced gender politics.

Elaine (Samantha Robinson), a widowed witch looking for a change of scenery, moves to a small town in Northern California and immediately captures the interest of the town’s male population. The statuesque brunette is completely charming and accommodating, and the film allows her to seduce the audience as she does men, hiding her darker intentions until later. Because while Elaine can easily arouse attraction, she desires nothing less than total devotion and luckily has a collection of spells to achieve that end. Unluckily, the spells are sometimes blunt instruments, and Elaine’s quest for love leaves behind a trail of corpses.

Elaine is essentially a serial killer, but the film is so completely told from her perspective that it’s easy to forget. In narration, she is open with the audience about her goal of turning sex music into love magic, and after all, she tells us, magic is simply channeling existing energies. The men in the film (and dating back to Elaine’s father in her memory) are body-obsessed and dismissive and in this context Elaine’s general intentions, if not her ultimate methods, are sympathetic. Scenes of Elaine meeting men are priceless, using campy dialogue for gender-reversed seductions, but even more rewarding are Elaine’s conversations with other women like Trish (Laura Waddell). Trish is a working woman who thinks relationships are based on mutual respect and is shocked when Elaine tells her she needs to grant the wildest fantasies of her man, which Elaine indeed does, acting both like a sex kitten and a mother, but this is only a prelude to subjugating the men entirely to her will. The Love Witch, as with other serial killer films, shows the destructive power of sexual fantasy run amok. Elaine is desperate for love, but men see her only for the role she can play in their own fantasies instead of seeing her for who she really is. However, Elaine too is in thrall to culturally defined stereotypes and only has eyes for emblems of classic masculinity, leading her to fall for straight arrow cop Griff (Gian Keys), the last person she should pursue.

The Love Witch has a bit of fat to be trimmed and the ending can be accused of trying to have it both ways, but overall is a giddy delight. Samantha Robinson is captivating, the film is visually stunning, a lovingly detailed portrayal of witchcraft and an astute repurposing of exploitation conventions.