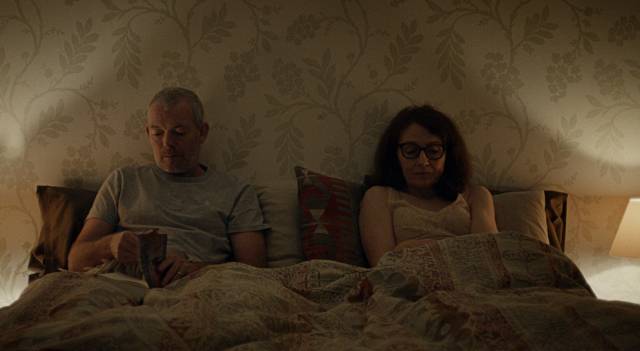 In Franz Kafka’s Metamorphosis, no one spends a lot of energy wondering how or why Gregor Samsa became a giant cockroach. Everyone — reader included — quickly accepts this matter-of-fact situation and works with the ensuing consequences. The beauty of Danish film Parents is similar. All the actors inhabit their predicament with lovely tenderness and abandon. Beginning with stark, contained orderliness and billowy freshness, a mature couple’s wistful, resigned gazes tell us something is amiss in their relationship. Whatever gaps have spread between them over years of marriage become noticeable when their son leaves home.

What happens when inexpressible longing gets fulfilled? It’s not via a time machine per se, but aged parents Kjeld and Vibeke (played respectively by Søren Malling and Bodil Jørgensen) do get to relive their past. The results are charming, startling and sometimes hilarious as one might imagine. Yet, unlike Tom Hanks’ fast-forward transformation in Big, an ethereal quality pervades the couple’s cosmic journey into their past. Watching writer/director Christian Tafdrup’s film feels like being glided across a remote mountain-lake region by an ever-smiling handsome steward at the helm. Everything looks wonderfully serene and the view alone has its pleasures, yet that smile might be deliberately over-reassuring.

It works very well, however. The smile, the plumped-up pillows and Kafka-esque predicament all click together perfectly, partly because we sense there’s a greater destination. Each detail we’re shown brings a comforting logic no matter how disconcerting it might be. We enter into once-upon-a-time not long after learning there’s not exactly a happily-ever-after. Who would not take such a journey, even if only to understand why happily-ever-after was not the final result? Though the trip may be through the looking-glass, somehow we’re never that far from the sensible, nurturing home that Kjeld and Vibeke created. Despite the strange magic, the total lack of self-consciousness and the familiarity of the parents, quite like those our college friends might have introduced to us over holiday dinners, help convince us that what happens to them will be a lesson for all of us. If re-experiencing desire was the ultimate destination on this itinerary, most of us would be on board; nevertheless, the film’s driving force goes further than recapturing the dew of lost youth. It submerges and seizes it with full throttle. The consequences are not what one might expect.

Carnal pleasure for Vibeke at least, is likely physically challenging, if not downright painful. For Kjeld, desire might be the medicine he needs to understand his current befuddlement. Amidst it all, this is the bigger question that Kjeld and Vibeke will face: how do they field their re-amped-up longing for each other in the second go-around? After embracing this long-lost blessing, what and how they continue to love might create even more interesting options than before.