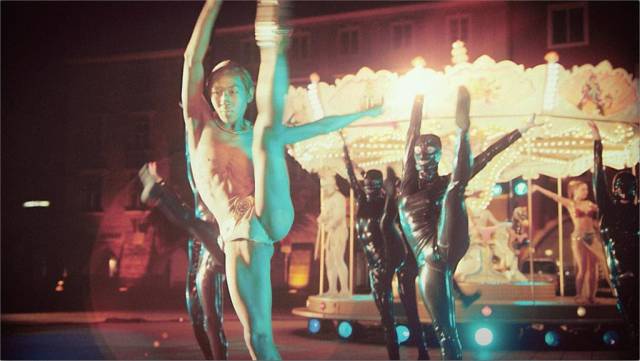 Rooftop Films officially kicked off its twentieth season on May 20th with a program of short films, the first of over fifty outdoor screenings they’ll host this summer. I have to admit, I’m not familiar with most of the films on the docket this year, but in years past Rooftop has earned the benefit of the doubt, consistently finding emerging filmmakers right before they hit it big. In support of their mission of finding new voices, Rooftop has continued to emphasize short films, with short film programs bookending the 2016 season and sprinkled throughout. The program on the 20th provided an eclectic mix of subjects and tones, encompassing both documentary and fiction.

Stations kicked the evening off with a breakneck trip through the NYC subway system, a fun visualization of its size and diversity. Next up was a piece from Rooftop “super-alum” Steve Collins, who presented a film at the very first Rooftop screenings back in the 1990s. Collins had five hilarious films interspersed throughout the night, serving well as interstitial palette cleansers joining the program together. Each of Collins’ films showed essentially one interaction, usually going off the rails fast and featuring actors John Merriman and Paul Gordon.

My personal favorite was probably the quasi-documentary Temporary Color, wherein the filmmaker supposedly sets out to film David Byrne’s color guard tour, only to find a more competent crew already filming. The filmmaker instead films the margins of the tour, forming a hilariously inept counterpoint to professional documentary, with lengthy digressions on the crew and the escaped New York convicts of that summer. This probably sounds like it shouldn’t work, but it does wonderfully, thanks to the strong, unique tone and a deft use of disagreements between image and audio.

A more traditional documentary, The Hanging, also impressed, showcasing the life of Kirill, a Moscow teen who recreationally scales skyscrapers and shares pictures of his climbs online. The film articulates what Kirill can’t; the intertwined danger and allure of the climb and the strange peace to be had looking down at a city from its greatest heights. Another standout was Bad at Dancing, which recently won a short film Golden Bear at the Berlin film fest. Bad at Dancing essentially mines all the awkwardness and aimlessness of a mumblecore feature and condenses it into an eleven-minute gem that portrays a perpetual third wheel in a shared apartment.

Overall, the night was a success and showed that the Rooftop programmers haven’t lost a step heading into their third decade. The rest of their season is stuffed with more outdoor films and will hopefully continue to bring underseen films to a wider audience.