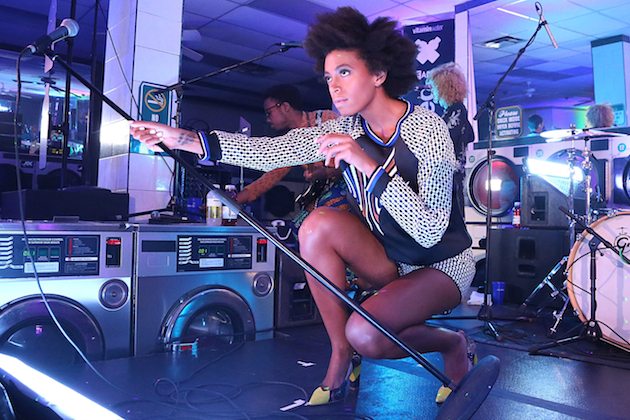 A rumor is floating around the Internet that Solange Knowles, Beyonce's little sister, has been tapped to play the dearly deceased Aaliyah in an upcoming biopic. This news comes as a giant shocker, cause let's face it, Solange is not exactly a household name. Add to that the fact that since her tragic 2001 plane crash, the love for Aaliyah has gone through the roof, and you have a pressure cooker of controversy waiting to explode. Let's look at some of the pros and cons of this potential casting decision.

Recently, Solange performed an "intimate" (read desperate) show at a Brooklyn laundromat. If she's starring in big budget films, however, she can stop performing at the laundromat. Which I bet she'd love.

You're disrespecting Aaliyah. If anything, people might want to see Beyonce, Rihanna, or a star of that caliber in a role so coveted. Whether or not it's deserved (or a result of her untimely demise), Aaliyah is beloved and revered as one of the greatest in her lane. You can't throw just anyone into a movie about her, without risking the fury of Internet trolls, or outright revolt.

Drake will be very sad. Drake's infatuation with Aaliyah has been well documented in his music, with him going as far as to interpolate Aaliyah lyrics in his singles, as well as record fake posthumous tracks between himself and the deceased starlet. Drake even went as far as tattooing Aaliyah's face on his back, despite never having met her. But as Whiny Rapper Quantum Physicists have discovered, there's an inverse relationship between Drake's happiness and the rest of the earth's. In other words, when he's upset, the rest of humanity automatically feels better, without even being able to discern the cause.

If Drake's feelings are hurt this deeply, who knows what kind of music we might be subjected to 10,000,000 spins of in the coming months?

What if this is Solange's calling? If she can't make it as a commercially successful musician, perhaps playing deceased stars in biopics is her calling? Only time will tell.

As this is written, Solange is sitting somewhere with a terminally swollen head. She's thinking to herself, "Beyonce! Beyonce! Beyonce! It's time to show the world what Solange is about! I'm the star now!" This is a recipe for disaster and heartbreak, and one we should all take very seriously.

Tweet us @Stagebuddy and let us know what you think about this casting choice, Aaliyah, and even Solange!