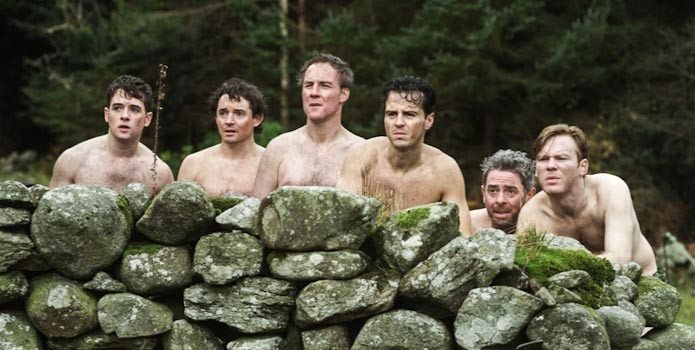 Andrew Scott is an actor who deserves a movie script that will really let audiences see his talent. “The Bachelor Weekend”, while funnier and funnier as it goes, is too safe and farcical to do the trick; so he wonderfully wriggles around the fuss. The part of Davin, an Irish professor who orchestrates a group camping trip for his uptight best friend and groom-to-be, Fionnan (Hugh O'Conor), is Scott’s first leading role on the big screen. He’s already an acclaimed stage actor, and after an impressive slew of supporting turns on film and TV going back to the 1990’s, Scott looks good as the main attraction.

Not that he doesn’t have some competition, namely in Peter McDonald. Twice the size of Scott, McDonald plays the ball-busting brother-in-law of Fionnan’s bride, Ruth (Amy Huberman). Davin and Finnion and their closest buddies--- Fionnan's brother Kevin (Michael Legge), Kevin’s older partner (Andrew Bennett) and businessman Simon (Brian Gleeson)---refer to him, with dread, as “The Machine”. The major bullhorn for the out-doors slapstick and crudeness of the script from director Jon Butler, McDonald, also Butler’s co-screenwriter, grips the movie firmly with a great physical performance---a gag where “The Machine” fails to hurl himself through the wires of an electric fence in front of his horrified onlookers borders on the sublime.

But it’s Scott who makes “The Bachelor Weekend” a surprise. He has a skill for completely nesting inside the seriousness of a moment. Watch Davin sing an acapella, fire-side rendition of “On Raglan Road” with a voice that is broken, but beautiful. The good-humored expression Davin wears as he and Fionnan joke about Davin’s dour love-life turns to quiet sorrow when Fionnan shows a secret picture of Ruth in her wedding dress. Scott doesn’t need a lot of attention from the actors and settings around him to convey the secrets of Davin’s character. It’s the film’s busy attachment to tying up all loose ends in order to quell the anxieties of Fionnan’s big day that block him.

Like its American relatives, “The Hangover” and “Bridesmaids”, “The Bachelor Weekend” is overstuffed with hetero-normative conflicts that get wrapped up in nice bows in time for Davin's best-man speech---Kevin’s partner almost isn’t invited to the celebration because of his homophobic dad, “The Machine” has been kicked out by his wife but an “I’m sorry” will get him back in, and so on. It also suffers from Peter Robertson’s cinematography. The actors rarely share the same screen as the camera cuts back and forth between their faces. The witty dialogue is too often telegraphed or marred by the visual shtick.

To his credit, Butler offers a comedy that risks feeling cheesy rather than just mimicking or mocking cheesiness itself, which is also why Scott is such a game-changer. When all the guests launch into a unison performance of U2's “One” at Fionnan’s and Ruth’s reception, the best reason why the stunt doesn’t feel totally unwarranted and ridiculous is because Davin sings along, too.