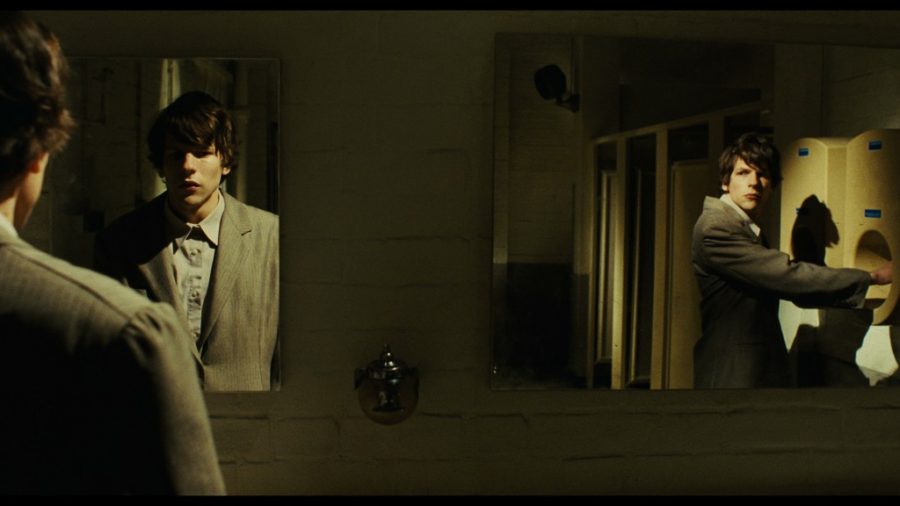 "I feel like Pinocchio and it kills me,” says Simon James (Jesse Eisenberg), the painfully timid worker-bee of “The Double”. It's one of the only lines that computes. Inspired by Fyodor Dostoevsky's 1866 novella of the same name, “The Double” is set in a dim, urban dystopia that seems not so terribly far removed from the Industrial Revolution, yet with the electronic chirps of its dinosaur-sized copy machines and apparent television taste for corny, 80's-wrought sci-fi, is oddly modern.

The people of the clanky brick and mortar wilderness are no less unreadable. Some of them jerk Simon around like he's indeed a helpless puppet-boy attached to strings. “I've worked here for seven years,” Simon murmurs to no avail when the security guard of his own office building won't let him through the premises sans ID. He subjects Simon to a song and dance of various paperwork to enter. His own mother (Phyllis Sommerville), though losing her memory, is lucid enough to express her dissatisfaction with her only child---they share a phone call that ends with Simon saying “I know I'm a disappointment, Mom”. No wonder even the small task of ordering a Coke at the local diner is capable of wigging Simon out.

To shake him up, director Richard Ayoade introduces Simon's dickish doppelganger, "James Simon" (Eisenberg). The essence of cool, James doesn't need a telescope to get close to Hannah (Mia Wasikowska), the flinty love-interest that Simon watches like a good old fashioned creep from his apartment window at night. James just steals mealymouthed Simon's most poetic lines about loneliness and repeats them to Hannah with a non-mousy voice that melts her hard exterior. Nor does James need work ethic to get the ultimate professional recognition that Simon has diligently longed for from “The Colonel”, the Big Brother-esque leader of his data-entry corporation. James simply exploits Simon's smarts with the threat of blackmail: James has naughty photos of Simon---er, himself---with their boss's daughter, and apparently because no one in their strange universe seems to notice that the boys are identical down to everything but the hunch of their shoulders, that is, unless James or Simon want to pass as the other, the threat intimidates Simon into doing his mirror-image's corporate homework.

Are you confused yet? "The Double" is really cool to look at, but it's not much fun to take in. Like Wes Anderson's lighter  “Moonrise Kingdom”, the visual rambunctiousness yet emotional aloofness of this anti-fairytale stymy a sense of stakes. Only a hysterical cameo from the very talented Chris O'Dowd seems to rise above the static. There are also the terrific subtleties of Eisenberg's dual performance. Watch close for the stealthy twitches of his face, the flashes of content in his sea-green eyes, the way he makes James' smugness look like hope, and how exquisitely he touches Simon's broken nose after a scuffle and says, “Ouch”. These details can't overturn Ayoade's strident direction, but they do dust "The Double" with some magic.