"Elysium", opening in theaters today (read our review here), tells a tale of a future where the population is divided between the poor 99% living on an overpopulated, polluted Earth and the rich 1% living in luxury on a floating space station.  It's a prescient allegory for our current economic climate, sure to ignite sentiments on both sides of the divide.  But "Elysium" is hardly the first futuristic film to take a good, hard look at our present.  Science fiction has, since its inception, been a genre inextricably linked with allegory, symbolism and cautionary tales.  So in honor of "Elysium", here are the top five allegories that sci-fi films love to tell over and over again. 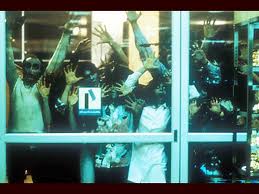 It is often easiest to find allegories close to home, and what's more ripe for commentary in America than our capitalist/consumerist culture?  One of the earliest and most famous zombie movies of all time, George A. Romero's "Dawn Of The Dead" (1978), is also the most famous movie allegory of consumerism.  After the zombie apocalypse breaks out, our small group of main characters barricade themselves inside a shopping mall.  Originally it was just going to be a pit stop to pick up supplies, but they find themselves seduced by material comforts and decide to stay.  Of course, that doesn't work out too well for them -- the mindless undead are drawn inexorably to the bastion of consumerism.  When one character asks what's drawing them there, another replies: "Some kind of instinct.  Memory of what they used to do.  This was an important place in their lives."

Pretty much every zombie movie, comic book and TV show ever made can be examined as an allegory of our mindless stuff-obsessed culture.  But that allegory isn't purely the realm of the living dead.  Pixar's family-friendly robot love story "Wall-E" (2008) is also a scathing commentary on our society's infatuation with comfort and technology.  In that future world, humans are shapeless blobs incapable of supporting their own weight, carried along in floating chairs and speaking to each other only through glowing screens.  It's a frightening vision made even more frightening by the fact that it's not all that unbelievable.  Of course, consumerism is a subsection of the larger theme of capitalism, which is itself often fodder for movies.  Take Justin Timberlake's action film "In Time" (2011), where money has been replaced by time and the wealthy are basically immortal, while the poor struggle to survive day by day.  The themes of "Elysium", centered around the division between haves and have-nots, are clearly inspired by the same capitalist critique that fueled "In Time". 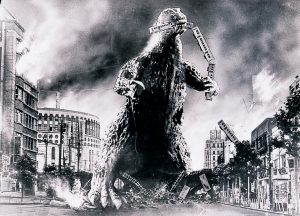 In the '50s, Japan churned out many films that were inspired by their understandable fear of nuclear radiation.  This fear manifested itself most famously in the hulking monstrosity of the now-infamous Godzilla.  The city-smashing beast made his first appearance less than a decade after the bombings of Hiroshima and Nagasaki, when concerns over the ramifications of those disasters were still rampant.  (Surprisingly, a film about a giant lizard evokes many allegories, and fear of radiation is only one.  It also addresses issues of post-war anxiety, pollution, science, and nationalism.)

Oftentimes the fear of contamination is more insidious.  Hand-in-hand with the exploration of the unknown comes the fear of being infected with -- or invaded by -- a terrifying foreign host.  The iconic "Alien" (1979) is more than just a haunted-house-in-space movie: it's also a film deeply rooted in male anxieties over pregnancy, made gorily manifest in the shocking "chestburster" scene.  The experience of having a living being growing inside of you is a strictly female one, so the male panic at the idea of being impregnated is a deeply-rooted psychological phenomenon that director Ridley Scott exploited to a tee.  "The Thing" (1982) is another gory film featuring people being infected by an alien, but it harbors a different fear.  In this film, featuring all men, you can't tell who is infected by looking at them, but only by a blood test.  Ring any bells?  The film came out just as AIDS was growing into an epidemic, and the anxieties over infection made their way into John Carpenter's classic horror film.

As seen in: "Invasion Of The Body Snatchers", "Starship Troopers", "V For Vendetta" 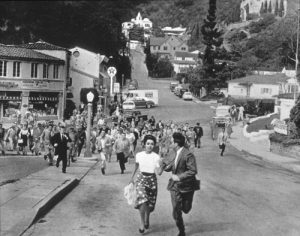 When the original "Invasion Of The Body Snatchers" was released in 1956, America was in the midst of the "Red Scare," spearheaded by Senator Joseph McCarthy.  The irrational fear of the United States being taken over by Communists was reflected in this eerie film where entire towns are replaced by emotionless pod people.  They may look like everyone else on the outside, but inside they are horrifying aliens bent on destroying the American way of life.

Fascism is another common target for science fiction.  Even "Starship Troopers", a pulpy shoot-em-up film about humans at war with giant bugs, can't escape parallels to the Nazis.  The clearly-Aryan officers, the use of adolescent soldiers, and the slogan of "Service Guarantees Citizenship" are all blatantly Fascist in tone.  "V For Vendetta" (2005) is similarly critical of Fascism.  In that film, a masked vigilante attempts to free a futuristic England from the grips of an evil dictator who controls the media and tortures innocent civilians.  It has undertones of both "1984" and Nazi Germany, but the film's trickiest achievement is in making a terrorist into a hero. 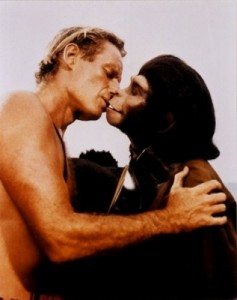 Those penning science fiction stories have long been committed to freeing the minority from the tyranny of the majority, at least in their stories.  And sometimes the easiest way to get people to understand the horrors of slavery and prejudice is to turn the tables.  "Planet Of The Apes" (1968) did just that.  When Charlton Heston's strapping hero washes up on the shores of a strange planet, he's shocked to find a world where apes are the ruling class and humans are the slaves.  Of course, many African-Americans at the time were outraged by the ape/African parallels, and were afraid that the movie would only fuel white fears of a black takeover.  But you can't blame the film for trying to highlight the evils of discrimination -- and the fact that Charlton Heston's onscreen smooch with an ape was less controversial than a kiss with a black woman would have been at the time shows that the film's message was a much-needed one.

The "X-Men", a popular series in both comic books and movies, has always been an allegory for minorities.  Its themes of prejudice and empowerment speak to any oppressed group, but it has repeatedly been linked with the gay rights movement.  Mutants are often hard to identify from their appearance, so they have to choose whether or not to "come out" to their family and friends, often in fear of being rejected for their otherness.  In an iconic scene from "X2" (2003), Bobby Drake (aka "Iceman") tells his family that he's a mutant.  Reflecting the sentiments of many parents who wish their children could just "be straight," Bobby's mom asks: "Have you ever tried...not being a mutant?"  In "X-Men: First Class" (2011), when a CIA-agent discovers that his scientist friend/coworker Hank McCoy is a mutant, Hank responds: "You didn't ask, so I didn't tell."  Other plots from throughout the series, including the registration of mutants and the development of a "cure", have profound meaning for the LGBT community.

"District 9" (2009), the first film from "Elysium" director Neill Blomkamp, also dealt primarily with minorities.  The plot of destitute aliens being segregated into slums in Johannesburg and treated like second-class citizens was both an obvious parallel to South Africa's period of apartheid as well as a wider allegory for the plight of immigrants worldwide.

As seen in: "The Day The Earth Stood Still", "Blade Runner", "E.T. The Extra-Terrestrial", "RoboCop", "The Matrix" 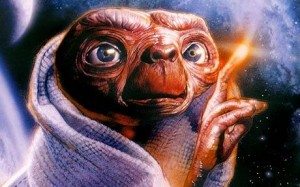 As long as science fiction has existed as a genre, its writers have been obsessed with the use of Christ-like figures.  In "The Day The Earth Stood Still" (1951), Michael Rennie played an alien named Klaatu who comes to Earth to preach a message of peace, assumes the alias "Mr. Carpenter," and ends up being shot and killed...and then resurrected by his otherworldly companion.  In "Blade Runner" (1982), the replicants are often seen as analogies for fallen angels; and the villain, Roy (Rutger Hauer), redeems himself by sacrificing himself for the hero (after driving a nail through his hand).  A dove appears as he dies and flies away into the sky.  In "E.T. The Extra-Terrestrial" (1982), the titular alien, often featured swaddled in a robe-like blanket, imparts lessons of love and compassion before dying at the hands of government agents, being resurrected, and then flying away into the sky with his family.  In "RoboCop" (1987), Peter Weller's Officer Murphy is wrongfully murdered and then resurrected to help vanquish evil.  (RoboCop is surely more violent than Jesus was, but director Paul Verhoeven says this is because RoboCop was meant to be an "American Jesus.")  In "The Matrix" (1999), Thomas Anderson (aka "Neo"), is believed to be "The One" -- the savior of all of humanity.  He is murdered after being betrayed by a member of his own group, but resurrects with seemingly supernatural powers and defeats the villain.  These five films are just scratching the surface of the genre's obsession with Christ allegories.

It may at first seem counterintuitive that such a science- and technology-based genre as sci-fi would be so obsessed with such overtly classical and religious allegories as Christ and resurrection.  But the roots of science-fiction are not just in asking questions about the future, but in seeking answers to those of our present.  The life of Jesus, the legend of the savior, and the myth of the resurrection are ancient and compelling stories that humanity keeps looking back to, no matter how advanced and forward-thinking we become.  It stands to reason that those who are dedicated to creating stories about people creating machines, robots, cyborgs, and clones would themselves be obsessed with their own enigmatic creator.