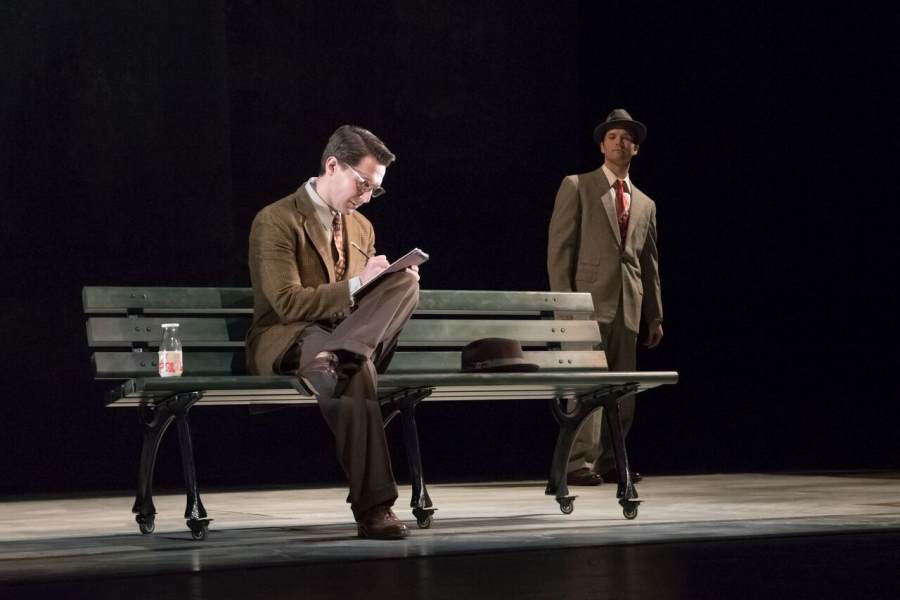 Politics. Sex. Love. Secrets. Intrigue. Power. Betrayal. All elements you’d find in a good spy thriller are also to be found in the new opera Fellow Travelers, receiving its New York premiere at the 2018 Prototype Festival. With music, story and performances mixed to perfection leading to a heartbreaking, chilling ending, Fellow Travelers, although an opera, has the feel of an intimate independent film -- partly because of the believability of the singers playing their parts with nuanced truth and partly because the music (Gregory Spears, composer) and text (Greg Pierce, librettist) meld so seamlessly, that you feel the performers are just speaking, only on pitch. Mr. Spears’ stunning score uses minimalistic undercurrents of rhythm, occasional pulsating drones, recitative and lyrical melodies combined with a bit of early Baroque ornamentation that sit hand in glove with Mr. Pierce’s penetrating lyrics. Being a playwright (his play Cardinal is currently playing at Second Stage Theater), Mr. Pierce understands how to craft a scene, write organic dialogue and use metaphor effectively.

Based on Thomas Mallon’s 2007 novel by the same name, the opera focuses on the illicit love affair between a young conservative journalist with anti-Communist views, Timothy Laughlin (Aaron Blake), and Hawkins Fuller (Joseph Lattanzi), a charismatic State Department employee. Slightly older, more sexually experienced and handsome, Hawkins gets Timothy his first job working for a Senator. Set against the back drop of the McCarthy era 1950s witch hunt for Communists and Russian spies, Fellow Travelers gives us a glimpse into the Lavender Scare, set in motion by President Dwight D. Eisenhower’s signing of Executive Order 10450 in 1953. To protect the country from blackmail/security risks, the order forbid the hiring of subversives including those potential Federal employees who might be “sexually perverted”. "One pansy can pollute," exclaims a government official.

As librettist, Mr. Pierce adheres to the novel’s structure of short scenes and in two acts and a series of 16 scenes we follow the doomed relationship. Bookended with scenes on a park bench in Dupont Circle between Timothy and Hawkins, the story unfolds from Timothy’s meager apartment where passion is first ignited to senators’ offices, an interrogation room and a Catholic church, among other places. Scenic designer Vita Tzykun and lighting designer Thomas C. Hase beautifully suggest each place with simple rolling set pieces that the cast move on and off stage and evocative shadows on the back wall. Letting the ensemble serve, by their “stagehand” presence, as witnesses or judges to the action of the play, director Kevin Newbury establishes the right 1950s blend of propriety and fear. As scenes bleed into each other and locations shift within a scene, Mr. Newbury directs with startling clarity and verisimilitude, giving emotional moments the time needed and aptly constructing the internal terror of possibly being found out for being who you are.

The centerpiece of Fellow Travelers is Mr. Blake’s vulnerable portrait of a gay man grappling with his Catholic faith and being in love with someone who doesn’t want the same kind of love. Reflecting upon the passions of the previous night, Mr. Blake, possessing a clear expressive tenor voice, bares his heart and soul in church in a technically difficult aria of hopefulness filled with leaping intervals. He sings tumbling questions over and over again -- "How many sins? How many kisses? How many whispers?" -- movingly concluding with gratitude to God for sending him this man. In counterpoint, Mr. Lattanzi’s smooth resonant baritone had the appropriate “born with a silver spoon in my mouth” quality, accompanied by a confident swagger of someone who always gets what he wants.

Under the baton of George Manahan, the American Composers Orchestra ably provided the musical support in the telling of this story. A special mention for the trombones; their playing provided the necessary Capitol Hill pomp plus dire warnings at the entrance of Senator McCarthy.

Fellow Travelers was developed and co-commissioned by G. Sterling Zinsmeyer and Cincinnati Opera and had its world premiere in Cincinnati in 2016. Alas, Fellow Travelers only had four New York performances. If you missed it, hop on a plane to Chicago; it is part of the Lyric Opera’s 2018 season.

Review: ‘Sága’ at the Prototype Festival 2018

Belgian indie band Dez Mona and Flemish B.O.X. (Baroque Orchestration X) wound up the 2018 Prototype Festival with an encore performance, bringing back their theatrical song cycle Sága after its great success in the 2016 Festival. Titled after Sága, the Norse goddess of storytelling and the keeper of ancestry, and also referencing medieval Icelandic epics, the evening was filled with a lush musical fusion of Baroque, jazz, tango and minimalism, with a soupçon of pop rock. The goddess Sága was often found drinking with the god Odin, who was the keeper of poetry; since stories and wine are good partners it’s fitting that Joe’s Pub was their concert venue. Singer/composer Gregory Frateur (one half of Dez Mona) is a modern day troubadour. With his extraordinary range and unique vocal timbre, he sang songs of longing; a searching for home, a desire for connection, a quest for wholeness with nature and with self. B.O.X. is a marvelous cornucopia of multi-talented musicians who create the orchestration and soundscapes for these yearning texts. Founded by lute virtuoso Pieter Theuns, who’s also one of the composers of Sága, B.O.X. seeks to tear down the walls between musical genres. Mr. Th …Read more