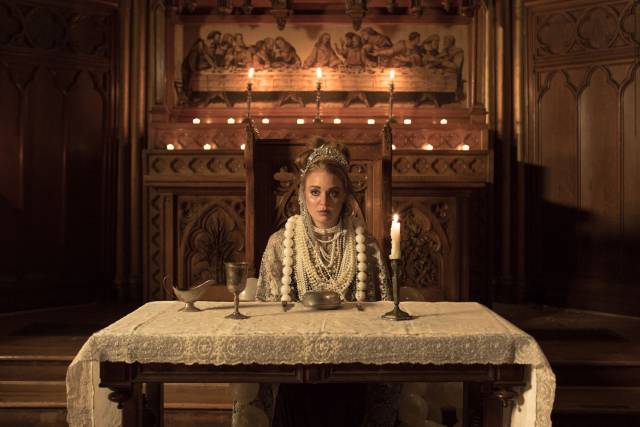 We spoke to lyricist and book writer Jason Craig about his new show Beardo making its New York premiere at St. John’s Lutheran Church. The musical is based on the life of the mysterious Russian monk Rasputin, played by Damon Daunno, who charms his way into the Czar’s court claiming he can heal the heir to the throne.

Why write a show about Rasputin?

He’s a pretty fascinating character, I like the fact that there wasn’t a definitive biography about him, every account of his life I read was contradicted by the next one. I liked the ambiguity because I could grab parts I liked and fabricate the origin story I made up for the show. He gave me an interesting template to expand on. Also the fact of someone being “outside of society” and disrupts the fabric of society is something that fascinates writers.

Maybe it’s a symptom of the times, but I couldn’t help but see the current political situation reflected in this story of a charlatan who becomes one of the most powerful people of his time. Was thinking about the show in the aftermath of the election different?

Absolutely, I wrote the piece back in 2011 when we were in calmer times and we didn’t have this turmoil we’re in right now. It resonates in different ways unfortunately, I didn’t think we’d see this kind of character in politics. I adjusted some of the text, but I didn’t want it to be too clever. There were definitely some parallels between the hoodwinking Rasputin and the hoodwinking Trump/Bannon. Some of the language has been adjusted, I did have more pointed language, at one point Beardo used the term “deplorable” but I thought that was hitting it over the head too much. I certainly don’t make political theatre but it’s important that we make work that resonates.

The characters never utter Rasputin’s name and it was so fascinating to see how people during intermission were Googling who this person was, and also trying to find the Wikipedia page about his penis. Can you talk about the choice to give him a different name and how this invites people to do research if they want to know more?

When I wrote the piece there was a Wikipedia page about his dick that for some reason has been taken down since. Not giving him the name Rasputin goes back to how unspecific the narratives I read were. I wanted to create my own character based on Rasputin, I could make up my own myth. It’s clearly based on Rasputin but it’s not him.

One of the most famous representations of Rasputin is the eponymous song by Boney M. did this song serve as inspiration for your disco number in the show?

Dave Malloy has never heard of that song, I grew up in Ireland where the song was very popular, but I don’t think it was popular in the States. They were a Caribbean band formed by Stock Aitken Waterman, I grew up hearing that song and it was my introduction to Rasputin. When we did the show in California we used it as a post-show song and I wanted to use it more throughout the show, but Dave wasn’t interested in doing that. It’s quite a catchy number.

I’m asking because the alliteration in some of your songs like “that shithead shot me with a shooter”, made me think of the chorus in “Rasputin”...

I guess I’m just a big fan of alliteration, when you have it with music it has much more force to it. It wasn’t particularly inspired by that song.

Can you talk about the use of the tape recorder in the show? At first I thought it was a quirky anachronism but then when we find out what’s in the tape it made more sense. Did the choice of a tape have anything to do with how composers revisit their material and discover new things?

That’s an interesting point. I guess so? I often find old notebooks with lyrics, which I guess is also a recording of a thought from a long time ago. I was interested in the timelessness of the character, so using an anachronistic object was a way to represent that. The cassette also represents his magic and mystery, I like objects you don’t expect to appear in a show, to appear so they can jolt your expectations.

What was your single favorite piece of trivia about Rasputin?

Reading about him the overall thing I took was how much fun he liked to have. He was a guy who wanted to experience life and how it became twisted in people’s minds that he was evil for doing this.