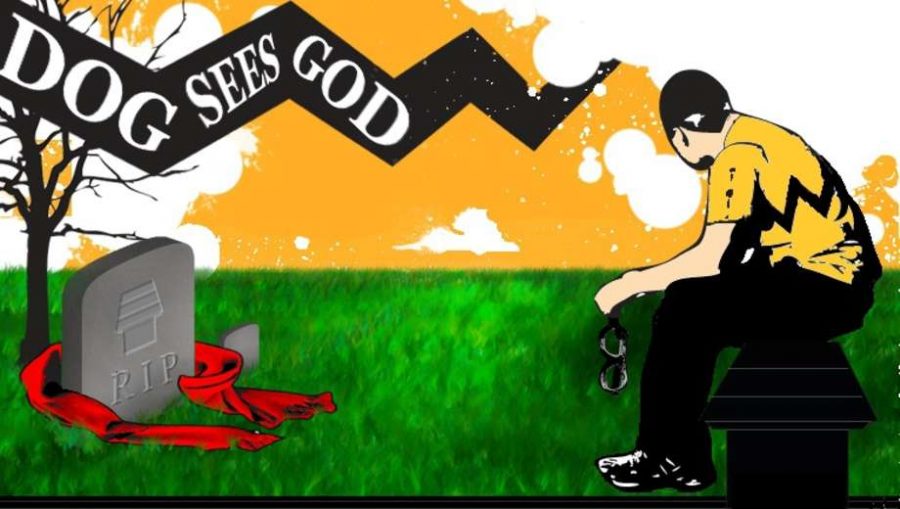 The wonder years of teendom are possibly the most potent of our lives, as we feel deeper, think different, see ourselves and others in new lights. Bert V. Royal's Dog Sees God, the Peanuts play, is a wonderful coming of age high school drama with a number of very smartly written moments and an excellent repurposing of the great American characters we all know and love. The young company Inner Circle Creative has remounted this work in a heartfelt, charming production.

The play opens with CB, or our old friend Charlie Brown (none of the original Peanuts characters' names are used, I assume for licensing reasons), a mature high schooler, writing to his old pen pal for the first time in years about putting down his dog, who contracted rabies and killed a little yellow bird that was always by his side. This morbid yet strangely delightful fate of Snoopy seems to follow all of the Peanuts universe, as the trials and tribulations of discovering yourself and patching an identity fall upon the wonderful characters of Charles Shultz's imagination.

CB’s Sister is a passionate young woman and a budding Karen Finley. Marcie and Peppermint Patty, now Marcy and Tricia, are gossipy queen bees; Linus, now Van, a stoner; Pig-Pen, now Matt (though the Pig-Pen nickname is still attached to him), a bully. Royal has bound features of the comic book characters' personalities to the insecurities of the characters in the play, and it seems that Matt is now a jerk because of issues concerning his former poverty and smelliness.

Everyone’s favorite character Schroeder is appropriately re-named Beethoven, and the aloof and thoughtful little boy is now mercilessly teased by Matt and others. CB, though, seeing the shades of the world in greater specificity following the death of his dog and best friend, falls in love with Beethoven in a very high school-y way. The incident ignites the drama for the remainder of the play.

To match these characters, with whom we have a rather intimate relationship, to general high school stereotypes is smart, and allows for those stereotypes to be grounded in a history, carved with the knife of our own understanding of them. Marcie and Peppermint Patty's -- I mean Marcy and Tricia’s -- relationship as teen girls that are all over each other is more fun because, I mean, who didn’t think those two would hook up when they were little girls. Also, teenagers, occupied with a lifetime full of grief and misunderstanding, often behave as stereotypes despite bleeding colorful internal lives and bouncy new ideas. This is elucidated very well in the script, as the dual characterization of the Peanuts character and the stereotypes ground behavior, but the writing and performance allow for the internal colors to shine.

And there were some very fine performances. Kristin Guerin as Marcy had consistent characterization that couched effective nuance at choice moments; her performance felt very teen, and as the incidents of the play affected her, she grew as a teen, took on the remorse as a teen. She also helped carry the comedy of the work; in fact, the whole ensemble had a lot of heart and silliness through the production.

To no one’s surprise, Lucy, here referred to as Von’s Sister, is locked up. CB visits her in prison, and she is given an excellent monologue that elucidates many of the central themes of the show. How can any teenager really know themselves, the world, the motivations as tangled as their emotions? Teenagers just do, and do passionate, and god thank them for it; it also breeds mistakes, sometimes real bad mistakes. It is a favorite monologue for young performers everywhere for good reason.

The play ends beautifully, as CB receives a letter from his pen pal, CS, about, well, keep-on-keeping-on, about optimism and love. The production realized this moment beautifully with a fine framing of CB upstage. I look forward to what they put up next.