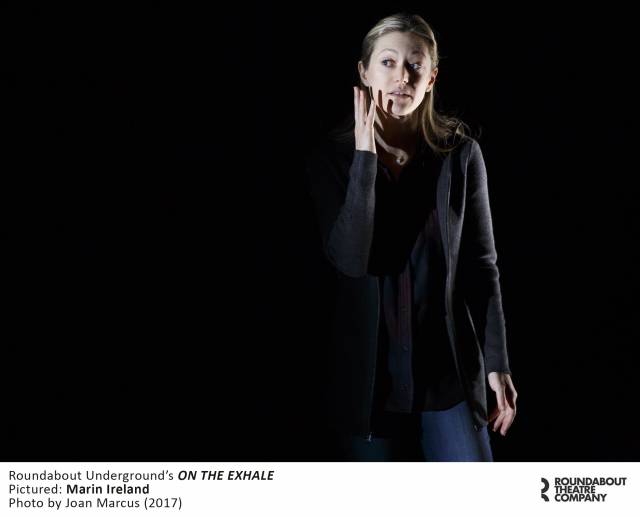 The horror of the Sandy Hook Elementary School shooting still resonates today, more than four years later. Roundabout Theatre Company’s one-woman show On The Exhale addresses this atrocity through the monologue of a woman who finds herself unexpectedly connected to the tragic event. This uncomfortable but important topic is made palatable by a wonderful team comprised of actor Marin Ireland, playwright Martín Zimmerman, and director Leigh Silverman, who brilliantly present the nuances of a woman going through something unimaginable.

Ireland is a women’s studies professor in a small college town in Connecticut. She is already on edge about the state’s latest concealed carry law that has forced businesses that do not welcome guns in their establishments to display stickers of a gun with a line through it. Shouldn’t it be the other way around, she muses, sort of like an opt-in for all the crazy people so the sane ones know to stay away? She is clearly anti-gun and, not only that, suffers from anxiety dreams as a result of a student’s hostile comments to her grade on his paper. She has even arranged her office so she can make a quick escape should the need arise.

Which is why, upon learning there’s a shooter at the school, she assumes it’s her school where she teaches. The unthinkable revelation that, no, it’s actually the elementary school sends her into a tailspin that culminates in an unexpected and complicated but profoundly human response.

Directed with a light touch by Silverman and with a minimal set (Rachel Hauck) and lighting (Jen Schriever), On The Exhale has an intimacy that feels more like a therapy session than a play. The drama is there but Ireland doesn’t play it up. It’s more of a confessional, somewhat matter-of-fact manner of speaking, which is not to say emotionless because there is plenty of emotion. But there is a sort of detachment as Ireland refers to herself in the second person (“you”), which has the effect of minimizing the sting and burden of the nightmare for the audience.

There is no way to make sense of such a senseless act but I’m glad for plays like On The Exhale that put forth stories of humanity’s triumph in the face of tragedy.

Interview: Playwright Martín Zimmerman on Violence and Redemption in ‘Seven Spots on the Sun’

Martín Zimmerman lends but one voice to the patchwork of rich Latinx experiences in his new play Seven Spots on the Sun, a gorgeously written exploration of love, miracles, and a country torn apart by tragedy. In an interview, he talks about his personal connection to the subject matter, the complex moral questions of the play, and the many exciting projects he’s currently working on. How did the concept of Seven Spots on the Sun come about? The play was born out of a research trip I made to my mother’s homeland of Argentina in June of 2007. Several years before, the Argentine government had just begun prosecuting crimes committed by the government during the dictatorship that ruled Argentina from 1976-1983. I was very curious about how that more than 20-year delay in the justice process had impacted victims of the dictatorship’s violence. Did justice delayed mean justice denied to them? How had this long wait impacted their emotional relationship to the justice process? This was the seed of the play. Why set the play in a fictional Latin American country rather than a specific setting within Latin America? I wanted the focus of the play to be on these particular characters and the …Read more