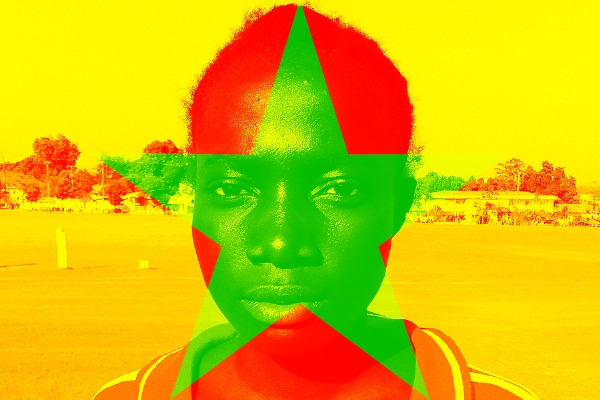 For four young women in Cameroon, independence and self-worth is found in soccer -- well, football -- in Melisa Tien’s Yellow Card Red Card, directed by Tamilla Woodward. These women have each other, and when life counters, as it inevitably does, the strength of their bond empowers each to honor themselves. In a joyful and moving production at the New Ohio, part of their annual Ice Factory festival, we see that a team preparing for the championship is made up of individuals preparing for the trials of life.

Yellow Card Red Card distinguishes itself as an elegant production, marked by creative transitions that buoy pace, gorgeous costumes by Sarita Fellows, and an eminently effective lighting design by Anshuman Bhatia. As the team practices and plays, the stage took on the scale, heat, and texture of a football field — I swear I had flashbacks to youth soccer. On a number of occasions, Woodward blocked her actors to face directly upstage, which created a nice sense of space, narrow dimensions that were then blown wide open during the game-play, as the women moved in a pattern and ran in place to represent running up and down the field. Oh man, it is so easy for this not to work, to make the audience feel stupid, but it was a total success: a real testament to her direction and control over the boards.

Chaos at home and a circumscribing culture are the primary antagonists in lives of Aisha, Christina, Soureiya, and Yasmin, our four protagonists. What is one to do when aspirations bump up against a well meaning but regressive social structure, and when dreams bump up against family practices and values? These questions are ever more challenging when personal health is on the line, or when love is in question. Tien’s play — divided into an expository first half as the team trains for the championship and a culminating second half that intersperses itself into the championship game (with a strange dividing quasi-intermission) — is about these young women transcending their station in life, making difficult decisions, and living with the consequences.

While we get the women’s tough decisions, disobeying family and the attending cultural norms, we don’t get the fallout, and it would perhaps have been worthwhile to see these consequences. This would’ve made for particularly fervent drama, helping the protagonists' difficult situation to resonate; without seeing the fallout, the ethical take away for the spectators is minimized.

The play ends, surprise surprise, with the championship and a celebration. Because we learn to love the girls, and knowing they each sit in the balance having made difficult decisions for their future, this conclusion is fulfilling. No matter what is in store, we get to celebrate with them.

The Obie-winning Ice Factory festival presents seven new works from June 28 to August 12 at the New Ohio Theatre. We spoke with playwright Melisa Tien about her play Yellow Card Red Card. Tell us about your play! Yellow Card Red Card is about four female soccer players in a small Muslim town in Northern Cameroon who are preparing for a championship that will determine the future of the team, and the trajectory of each girl’s life. It incorporates movement based on the games and practices of a real-life Cameroonian girls’ team, and is really a play-and-sporting-event-in-one that explores what happens when young women in a socially and culturally restrictive environment begin to recognize their own agency. It was inspired by a girls’ soccer program in Cameroon that began more than seven years ago, based on nothing more than the conviction that getting girls and young women out of their homes would be good for them (this is in a part of world where women can’t typically leave the house without being accompanied by a male). The fact that those who initiated the program believed in the effects it could have on the girls’ lives, enough to embark on the near-impossible task of recruiting …Read more

Review: ‘The Anthropologists Save the World!...
Interview: Melisa Tien on “Yellow Card Red C...
Review of ‘War of the Roses: Henry VI & ...
Review of ‘Dress of Fire’