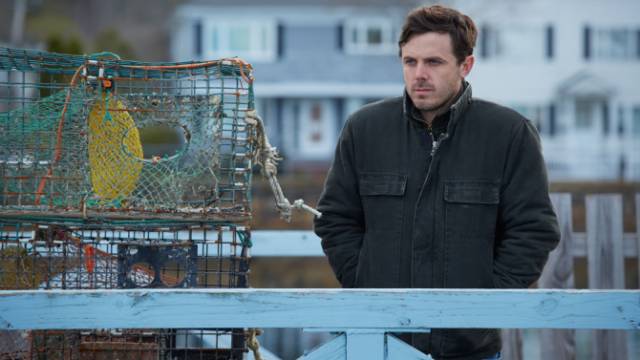 Some cinephiles feel that they’ve seen everything before. There is no movie that hasn’t been done — no formula that hasn’t been treated, picked over, or inverted. This isn’t even touching on the rampant and largely unsuccessful studio preference for remakes, sequels, and reboots, but a general issue with movies at large. In Manchester by the Sea, Kenneth Lonergan does not try to conquer this impasse, and so he avoids the fussy preciousness of most auteurs trying to make a name for themselves. Instead Manchester by the Sea sustains itself by making each element somehow perfect even though the sum total is so simple, it appears ambition-less.

Casey Affleck stars as Lee Chandler, a handyman forced to return to his hometown after the death of his brother (Kyle Chandler) to care for his brother’s estate and son, Patrick (Lucas Hedges). It is a small town where everyone knows him and treats him gingerly due to some unmentioned earlier event. See what I mean when I say the premise is basic? But the excellence of the movie comes from every element in every second on screen. The heft of Affleck’s movements, the tinny quality of his soft New England accent. The throwaway joy of flashbacks to his life with his ex-wife (Michelle Williams) and the randy, good humor of the half-orphaned son who is, after all, still a teenager. Lucas Hedges is magnetic in this role. You might recognize him as the overly violent boy scout in Moonrise Kingdom. He carried Wes Anderson’s manicured banter effortlessly there, and here, he seamlessly inhabits Lonergan’s vibrant dialogue.

Said dialogue is essential to the what makes the movie work. The action is slow and uneventful. It approximates the rhythms and mundanity of real life, but each moment is so perfectly crafted, you aren’t waiting impatiently for it to move on. It pretends to be a facsimile of reality, but it is really a much better version of life that masquerades as realism. It’s how you want conversations to actually sound, jokes to actually feel.

The one thing that doesn’t sail smoothly and effortlessly in the movie is grief. Seasons slide by, weighty conversations happen, but there is no way to really shrug off tragedy. It’s not hard to guess the broad strokes of Lee’s mysterious past before its reveal. It is no special perversity that makes the tragedy raw; rather, it is the fact that tragedy isn’t packaged neatly into a dramatic arc that gradually tapers it off or comes to some cathartic climax. It just drags on forever. Lonergan is comfortable hewing to the standards of self-evidently good craft, and working off of a modest plot that avoids self-reference or stylization. But redemption is a classic plot device that he refuses to indulge in. This elevates the movie well beyond schlock, and gives it the tone that Lonergan is coming to embody. I guess it’s possible to be a distinctive auteur without abandoning subtlety.

Jeff is a “f-ck up.”  Kicked out of the Navy and in debt, he’s living in one room that he rents from his brother.  For the last nine months, he’s been working the graveyard shift as a security guard (not a doorman, which he takes pains to explain). Funny and garrulous — his boss, William (Brian Tyree Henry of TV’s Atlanta), calls him a “joker” — Jeff is also somewhat lonely, and when anyone else shows up, he talks almost nonstop. The central character in Kenneth Lonergan’s Lobby Hero, now playing at The Hayes Theater, Jeff, anxious to make connections, insinuates himself into other people’s lives. Among them is William, who has an ethical dilemma: Should he provide the alibi for his brother who may have committed a horrific crime?  Jeff lends a willing ear as William confides in him about his quandary. Later, whether it’s to impress the young female probationary cop or to ease his own conscience, Jeff reveals some of what’s been shared with him in confidence.  He also lets the cop, Dawn, know that her partner Bill has been upstairs in the building spending time with a prostitute. Trip Cullman deftly directs the revival of this prize-winning play. Lonergan’s work is skillfully wri …Read more