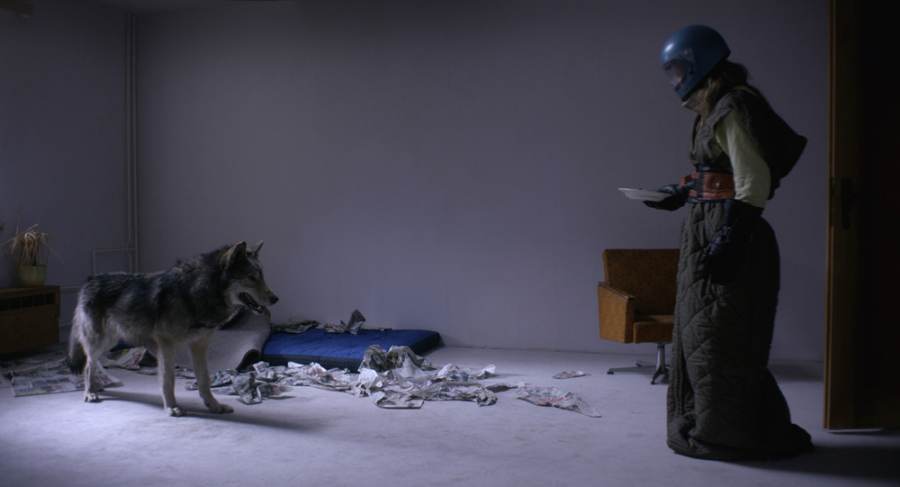 Full as it is with often complicated imagery and complex symbolism, it is perhaps a relatively simple image in Nicolette Krebitz’s film Wild that is most telling: a young woman named Ania (Lilith Strangenberg), having begun an obsession with wolves after seeing one in a park near her apartment, at night stands outside in a pool of light and reaches her hand out into the pitch-black darkness beyond—one might say, into the unknown.

Wild's plot is quite simple: Ania has a mundane office job and lives in a bland apartment wherein she used to live with her grandfather who is now dying. She is a loner—single and seemingly uninterested— and she likes to shoot guns at a shooting-range by herself. One morning on the way to work, she sees a wolf in the park and becomes obsessed with it, to the point of figuring out a way to capture it and keep it in her apartment. As a—to say the least—unusual bond forms between Ania and the wolf, her apparently long-suppressed passions emerge and she starts displaying increasingly primal tendencies.

The film's moods range from darkly funny to suspenseful to repulsive, and frequently it’s hard to say exactly what feelings it is arousing. It is not a werewolf tale, but, in some ways, it is the ultimate werewolf tale—its central theme, to be sure, is what lies at the root of all similar stories: the meltdown of the dichotomy between nature and society. The film is right in not wasting much time in the beginning trying to articulate Ania’s character—incongruous though her interior might be with her civilized environment, on the exterior she is a symbol of the conventions of that insubstantial environment.

Then she sees the wolf and thereby discovers a wholly oppositional symbol, albeit one that neither thinks about what it represents nor gives a damn, and she follows it down a rabbit hole where she merges with it beyond all notions of societal representation, into a state of being where things don’t mean anything at all, they just are. Strangenberg is almost demonic as Ania—shockingly, mesmerizingly so. As she disintegrates into a bestial state, she is equally frightening and worthy of sympathy, and yet…and yet, in many ways, this is a story of self-revelation and there is something perversely triumphant about it in that regard. It is, in all events, a terrifically disturbing flick that signifies as much about society as it does about unbridled nature. Indeed, Wild digs to a point where it is hard to tell one from the other.