The recent Carole Demas and Sarah Rice offering at the Laurie Beechman Theatre, Thank You for Your Love: Our Celebration of Tom Jones & Harvey Schmidt, was no ordinary tribute show. The singing duo, who have both enjoyed a long professional and personal relationship with lyricist Jones and composer Schmidt (and with each other), offered much more than just a selection of representative titles from the songwriters' catalogue in this two-hour presentation. Rather, they (and director Charles Repole) staged a grand, loving reunion. There was an overture (from The Fantasticks, the writing team's famously long-running off-Broadway musical). There were projected images that resurrected key moments from the writers' joint career. Special guests in the audience were acknowledged and welcomed—including Jones, who held forth on the stage for several minutes, to the delight of the singers and listeners. (Schmidt was in Texas and u 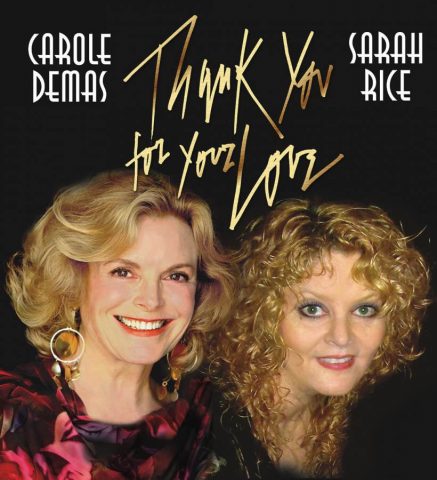 The songs of Jones & Schmidt have a particular niche in the canon of American musical theatre. Paradoxically, there's something both fanciful and straightforward about them, and they tend to have a kind of delicacy. (It seems perfectly right to accompany them with just piano and harp, as was done in this show—which is instrumentation you probably wouldn't choose for a song list celebrating, say, Irving Berlin or Jerry Herman.) Jones & Schmidt's songs tend to wear their sentiments on their sleeves. If you push the emotional content or overplay the whimsy, they can seem precious (in the pejorative sense). Fortunately, Demas and Rice (both of whom portrayed "The Girl"—Luisa—in the original New York production of The Fantasticks) are talented actors as well as fine singers. They know how to play intense sentiment without edging into sappiness. Rice informed us that Jones and Schmidt taught Fantasticks cast members to address audience members as a kind of collective best friend. The two singers' mastery of that advice was evident throughout this performance.

Because The Fantasticks is so central to the Jones/Schmidt identity, it would have seemed logical to perform many selections from its score. But—wisely, I think—only three titles from the show (apart from the aforementioned overture) were included: "Soon It's Gonna Rain" (with a spoken introduction by Hal Robinson, an actor who once played El Gallo in the musical), "I Can See It," and a portion of the indispensable "Try to Remember" (at the finale). Filling out the program were songs from lesser-known shows, including 110 in the Shade, I Do! I Do!, Collette (and its later incarnation, Collette Collage), Celebration, and Philemon. One of the most effective numbers was the "The Room Is Filled with You" a song of romantic loss, from Collette—performed by Demas in the classic torch-song manner: center stage, in a pool of light, sitting on a stool. The song has a lovely, sweeping melody line, and it deserves to be heard more often. A comic novelty song, "Feed 'em Grits," provided a glimpse of one of the earliest Jones & Schmidt collaborations. The raucous, silly song was written for a college show, Time Staggers On, back in 1951 when the budding songwriters were students at the University of Texas.

Demas and Rice's significantly different vocal characteristics were showcased well throughout the evening. Rice's soprano is ethereal and assured. It took on a stirring intensity on "Old Maid," the aria of an unwilling candidate for spinsterhood (110 in the Shade). Demas's voice has an earthy, vulnerable effect, evident on "Joy" (Collette), "I Love His Face" (Philemon), and "The Room Is Filled with You." Nowhere did the contrasting sounds complement each other better than on the duet "A Man and a Woman" (110 in the Shade). A masculine perspective was added to the mix on several selections, thanks to vocals from pianist Joe Goodrich. His rich, full sound was especially welcome on "Soon It's Gonna Rain," a duet with Rice. And his exuberant work at the keyboard was a joy throughout, as was the musicianship of Maria Banks on harp. I especially liked the way the two artists' playing suggested a gathering storm during "Soon It's Gonna Rain."

One of my two suggestions for the show would be to rethink the ambitious arrangement/instrumentation on "I Can See It," which seemed a bit busy and intrusive. The other would be to rethink whether or not the occasionally used reverb effect from the sound system is a good idea. I found it unnecessary and distracting.

Those quibbles aside, I thoroughly enjoyed Thank You for Your Love. Deep in December (and beyond), my heart will remember it with great affection.

Additional performances have been scheduled for October 1 and 7