February 22, 2015
Cabaret
Review: Tim Realbuto – Bookseller in the Rain at the Metropolitan Room 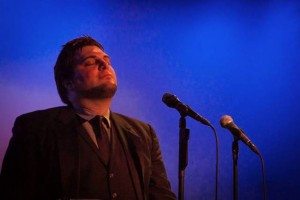 Earlier this winter the Metropolitan Room generated much publicity for setting the Guinness record for longest variety show ever. With Tim Realbuto's "Bookseller in the Rain: A Tribute to the Music of Maury Yeston," the club may well have quietly attained another superlative achievement: the most singers and musicians to simultaneously perform on (and around) its small stage.

At this show, which was attended by Yeston himself, Realbuto and his musical combo, led by his music director and pianist Julianne B. Merrill, were joined by 17 featured solo guest performers Added to that number was what was billed as a 30-person vocal ensemble. (Actually, although 30 names were listed as part of this chorus, a few of these performers were also among the 17 "guest stars.") In any event, there were a lot of singers on the premises. Some sat at tables in the audience; others hung out in the basement and climbed upstairs and into the showroom to perform during three or four ensemble numbers. It seemed like a lot of effort, considering that these vocalists were utilized so little. Still, they certainly sounded swell when the big musical moments came. If record producer Phil Spector famously created a "wall of sound," Realbuto went one better and built an aural fortress.

Unfortunately, the quality of the evening's solo performances was uneven. Realbuto himself possesses a robust and clear singing voice that can ruffle the rafters, but—perhaps because of all the other duties involved in putting together this elaborate show—he seemed a bit distracted. His eyes drifted to his music/lyric charts during certain numbers, and his onstage banter was sometimes a bit rambling.

More critically, several of the young guest soloists on the bill simply didn't demonstrate the poise or the sensitivity needed to succeed in a cabaret setting. In part this may have been due to the selection of material. Yeston's music is varied in content and style. But the juiciest numbers in his songbook tend to be showstoppers—and those are the numbers that singers (especially theatre singers, many of whom were on view this night) understandably want to sing. There was a lot of too-loud, brash, show-offy singing during the program, which went on for well over two hours, with no intermission (things didn't begin until about 9:45, so it made for a late night). Realbuto's boundless affection for Yeston's work—and his desire to present plenty of it—seems to have tripped him up. How much better things might have been had he been more selective—both about what was sung and who sang it—and scaled things back to a trim and sparkling one-hour show.

Some fine things were accomplished during the course of the evening, however. Two singers with voices leaning toward the operetta-ish were among the standouts—both performed selections from Yeston's 1991 musical Phantom. Wendi Bergamini showed dramatic flair on diva-entrepreneur Carlotta's "This Place Is Mine," while Natalie Ballenger was winsome singing the role of Christine (with Realbuto as Erik) in the gorgeous "Home," which boasts a truly irresistible Yeston melody.

Other strong performances happened late in the program, during a section of the show devoted to 1982's Nine. Aaron Walpole was boisterous and charismatic singing "Guido's Song." Despite a flub and a do-over on a tongue-twisting lyric, he held character and delighted the audience. Young Joshua Colley had impressive stage presence singing "Getting Tall." And Tonya Pinkins provided a sexy and funny "Be Italian." The song is arguably not one of the strongest in the Nine score, but you wouldn't have thought that to hear Pinkins sing it.

Best of all was the concluding sequence, featuring music from Titanic (1997). It included a bittersweet and musically satisfying performance of "Lady’s Maid" as well as some rousing choral passages. This finale stirred the emotions of listeners before they gathered their layers of outerwear and prepared to step into the February freeze.

"Bookseller in the Rain: A Tribute to the Music of Maury Yeston"
Metropolitan Room  –  February 15