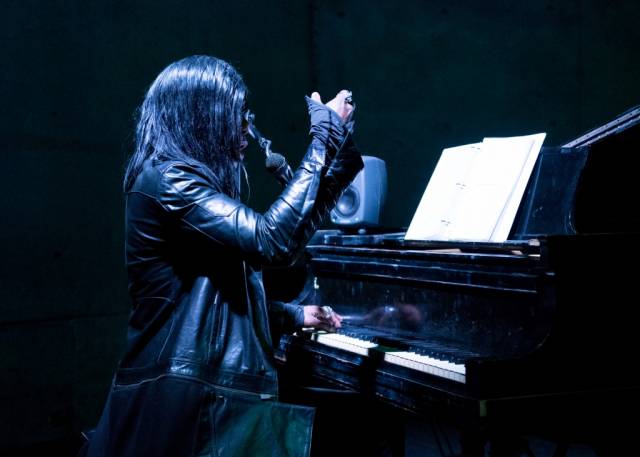 In Funeral Doom Spiritual, composer M. Lamar elevates the insurmountable grief of the systemic oppression of Black America into music. Lamar’s work draws from opera, metal, and Negro spirituals to condemn the recent police executions of Black men while lamenting and exalting the victims of such brutality. Lamar’s mission is, in his own words, “to mourn--always to mourn,” but also to provide “a psalm of woe and a call to action.”

Seated at his piano, Lamar exudes the stage presence of a diva: glamorous, gothic, and powerful even in pain. The other players, dressed in executioner garb, evoked the urgent, unyielding terror of, to use the opera’s own words, “state-sanctioned genocide.” The music, composed by M. Lamar and Hunter Hunt-Hendrix, evoked a soaring, saddening dissonance. The manner in which Lamar’s untethered counter tenor surged above the careful cacophony was by turns a thing of beauty and heartbreak.

Projections on the back wall of the theater portrayed Lamar in a coffin, first lifeless, then awoken. These images told another story very critical to Lamar’s work: that of an oppressed man reclaiming his body, a body violated for centuries by white supremacy. Another telling line: “Since they took you from me/your death has become my life.” Through his music Lamar is part time traveler, part alchemist, melding musical forms from Paris opera houses and slave plantations, commenting on the racial injustice of America both then and now.

The spiritual tradition arose during slavery, both a healing process and covert commentary on the cruel realities of being Black in America. Lamar’s work contains a similar duality. When he sings of Judgement Day, he also sings of justice and an end to oppression. Funeral Doom Spiritual is a processional. Its eulogist, M. Lamar, carries the past alongside him as he looks forward. The rest of us ought to follow suit.