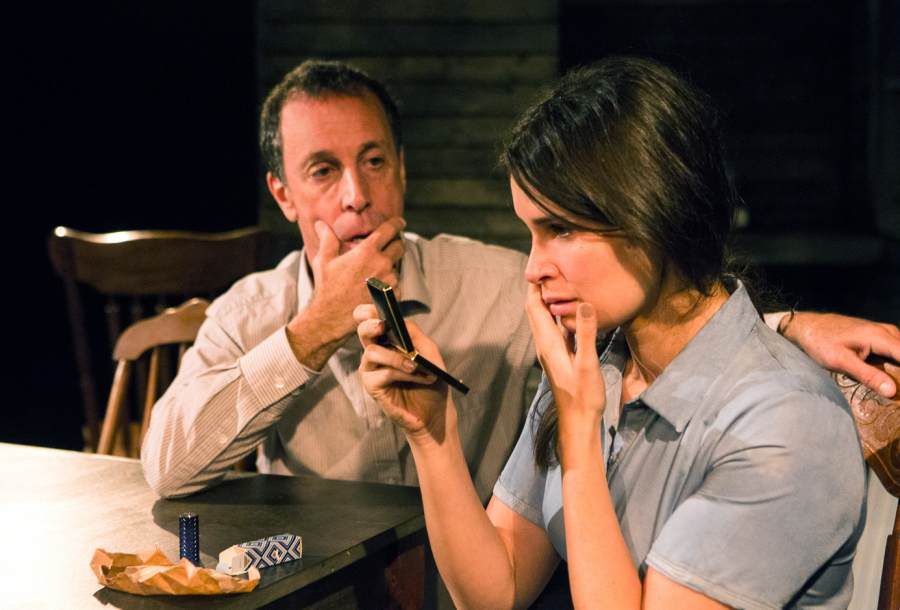 We probably don’t need another reminder right now that a compact brain, the miracle of fire, and a few lines of iambic pentameter are pretty much all that separate us from our prehistoric ancestors. But here comes one anyway: Boundless Theatre Company’s revival of María Irene Fornés’s 1983 drama Mud. Looked at one way, the play can be seen as a retelling of homo sapiens’ emergence from the primeval soup and their sobering realization that they’re still pretty soggy.

Mae (Nicole Villamil) and Lloyd (Julian Elijah Martinez) share a crude rural home somewhere in the vicinity of abject indigence. Fornés describes their dwelling in her stage directions as “a wooden room which sits on an earth promontory.” The pair of young adults grew up together here, but they’re not brother and sister. We never learn their full history, but we know that Mae’s deceased father had taken Lloyd in as a child. (When asked at one point to describe what her relationship to Lloyd is, Mae cannot find the words, although there has clearly been some sort of sexual relationship between them.) Both children grew up illiterate, but Mae of late has been attempting to learn to read, even while insisting that she doesn’t have the memory to retain information. In the early scenes, Lloyd is sick, possibly infected with an STD of some sort. Considering that he admits to having had relations with one of the hogs on the place, it’s anybody’s guess. Mae enlists an acquaintance, Henry (Nelson Avidon)—a man who knows his way around the alphabet—to try to get Lloyd medical help. Attracted by Henry’s smarts and his relative sophistication, the aspirational Mae invites him to move in, which sets up a sort of dangerous love triangle in the household. It’s a little like Design for Living, if Noël Coward had written about a world where trysts with the livestock don’t raise eyebrows. In any event, no good end can emerge from this altered ménage.

Director Elena Araoz follows the playwright’s stage directions closely, including having the play’s seventeen short scenes end in a freeze frame. Composer and sound designer Nathan Leigh’s score enhances this effect by having a cacophony of percussion erupt when the freezes happen. Otherwise Leigh’s musical accompaniment consists of ambling guitar passages. Araoz has had the characters speak with accents suggesting hill people of Appalachia, though there is no indication in the published script that Fornés wrote these characters with any geographical specificity in mind. This is not a major problem—it just detracts from the universality of these characters. (Still when pig-shtupping is a factor, must we always necessarily conclude that we’re in Deliverance country?)

Mud possesses a kind of stark power, fueled here by the earnest, workmanlike performances of the three cast members. The standout for me was Avidon. His Henry clearly takes great pride in his relative erudition and good manners within the household. It’s right that he comes off as didactic and smug. Midway through the play, Henry becomes severely paralyzed, and Avidon not only ably depicts that affliction generally but also shows specifically how it affects this particular character. He has better luck than Martinez, who faces the unenviable task of portraying someone stricken with a severe and prolonged stuttering attack. Martinez strives valiantly, but the scene doesn’t quite come off. In other sequences, he’s fine.

As for Villamil, she has some wonderful moments, especially in scenes where Mae awakens to the possibility of living in a more socially organized world. I found two such moments to be especially striking. In one, Mae applies lipstick, apparently for the first time, and gets an alarming glimpse of her face in a compact mirror. In the other, she grasps desperately to retrieve from Lloyd her beloved biology textbook, which—aptly—details the lives of marine creatures clinging to or skittering over the slimy substrate in order to stay alive.

In Manhattan at Teatro Circulo