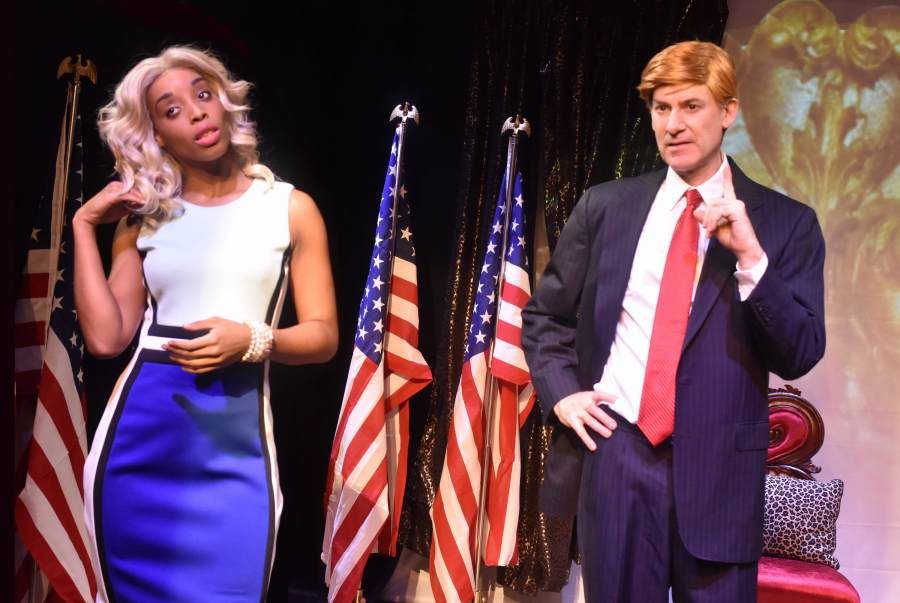 It seems sometimes that every other entertainer working these days has a Trump impersonation at the ready, though many seem to miss the mark by a mile. I’ve never been especially enthused about either Alec Baldwin’s blustery turn on Saturday Night Live or Stephen Colbert’s sing-songy nightly routine on Late Night. Surprisingly, Trevor Noah of The Daily Show seems to have come as near as anyone to capturing Trump’s essence. (Maybe it took an outsider to the American scene to get the job done right.)

The subtitle for Transparent Falsehood, a new Trump-excoriating play by Gil Kofman, is “An American Travesty.” The word “travesty” here seems not to refer to Merriam-Webster’s first meaning (“A debased, distorted or grossly inferior imitation”) but rather to the more theatrically related second definition (“A burlesque translation or literary or artistic imitation usually grotesquely incongruous in style, treatment, or subject matter”). One might thereby expect the production to exaggerate every nerve-shattering Trump mannerism and vocal tic. But that’s not the case. In fact, just the opposite is true. As a program note for the show explains, “[W]e ignored Trump’s signature comportment, age and physical bearing, we overlooked the ethnicity of certain family members, as well as double cast gender in some roles for specific effects. Our aim was to italicize and reclaim what was lost in all the white noise of Trump’s thoughtless chaos.”

The play (staged for PicturePendingProductions at Theater 511) focuses on the behind-closed-doors Trump, although, in this rendition, the self-absorbed commander in chief is so concerned with perpetually being seen that he’s convinced himself a hidden, ninja-like documentary film crew is omnipresent, capturing his every move.

The talented Ezra Barnes, who plays Trump, doesn’t give us a full caricature. Barnes is a relatively slim actor with fairly angular features. He doesn’t talk in a droning voice, shrug while making a closed-mouthed grin, or make his lips pucker and flare out like those of a barnyard mammal having a Flehmen’s Response. And yet, this is one of the most chilling, disturbing and—somehow—spot-on characterizations of the president you’ll likely see. It’s as though Kofman, Barnes and director Richard Caliban—throwing off the expected cosmetic trappings of the Trump reality-show persona—have found the grotesquerie in Donald J.’s inner life. There’s the opening scene, for instance, in which the president plays a hand-slapping game with son Barron (Wyatt Fenner). His blithe sadism toward the boy and his ruthless drive to win the pointless game are shockingly plausible. So is his casual, contempt-filled dismissal of wife Melania (Stephanie Fredricks) when she needs quick assistance zipping up the back of her dress. “Do it yourself,” he mumbles, with a bored snarl. (Later he volunteers to zip the dress of daughter Ivanka (Latonia Phipps), over whom he all but drools.)

Is the play funny? At points, yes. But on the night I saw it, it didn’t earn a lot of big laughs. At one point Steve Bannon (the terrific Chuck Montgomery), in a men’s room scene with Trump, tells a tasteless joke about Rosie O’Donnell. “Not funny,” Trump responds. “Almost funny. But too scary to be funny.” That assessment might well describe Transparent Falsehood.

Kofman’s script is loosely constructed. The first half is built around preparation for an HBO show in which Trump is to headline. The extravaganza features footage of the president’s colonoscopy, as shown on a Jumbotron, lovingly narrated by the man himself.

This HBO storyline gets largely dropped in the show’s second half, which includes a scene featuring a Mar-a-Lago Seder with Ivanka and a scantily clad Jared Kushner (Fenner again) as well a sequence in which Trump visits Barron’s classroom. The finale is a bit in which The Donald has a midnight visit from the imposing ghost of his father, Fred. Here we see a more vulnerable (though not-at-all sympathetic) character. When dad asks son, "They say you were helped by the Russians, is that true?” Trump suddenly seems sad and shamed—a nasty little boy, fearful of the iron-fisted patriarch. It’s another startling, telling beat in this odd but intriguing production.