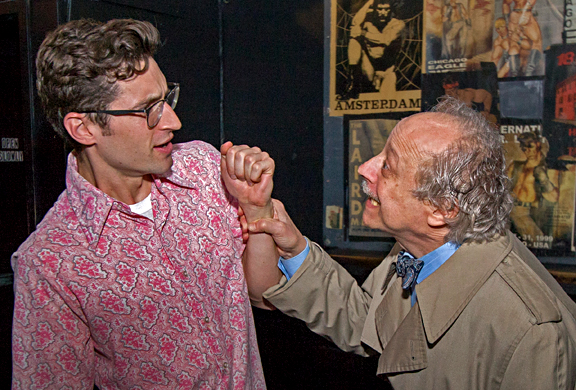 TOSOS (The Other Side of Silence) was an Off-Broadway theater company run by the inimitable Doric Wilson, whose passing was felt deeply by the Off- and Off-Off Broadway theatre community he served so well. Fortunately, the company was resurrected in 2002 and continues today under the leadership of Artistic Director Mark Finley. In the tradition of Caffe Cino (generally credited with beginning the Off-Off Broadway movement of which Wilson was a part), the Eagle Bar NYC has graciously admitted theatre-goers into the depths of its lair for a laugh-filled evening (and some tears, too) in TOSOS's revival of Street Theater.

Finley's direction in this second revival is impeccable. At the play’s opening, Finley suggests that we take a second look at a play whose witticisms hold a new significance in the Trump era. He is the kind of director who lets the audience know it’s okay to laugh, allowing the humor of Wilson’s script to shine through. Chris Weikel (a wonderful playwright himself) whose delightfully creative costumes help the storytelling beautifully during this incarnation of Street Theater, chatted with me during intermission. “It’s a true community here at The Eagle, the owner makes certain of that," he said. "We were welcomed wholeheartedly."

The plot is simple, we meet the folks who later become players in the historical Stonewall Riots, giving birth to the LGBT community as it seeks to find its voice. Like Thornton Wilder’s Our Town, which is briefly alluded to, this community has a narrator, in the form of Murfino, the manager/owner of Stonewall, played with gusto and a strong comic sensibility by Christopher Borg. He introduces us to a panoply of characters who co-exist on the streets just outside of Stonewall. The standout performances here are by the two drag queens, Boom Boom (played with hysterical histrionics by Michael Lynch) and Ceil (played to perfection by Chris Andersson). There’s a cop (played tersely and with great authority by Chris Harcum), an undercover passerby played handsomely by Russell Jordan, a very sexy leather man (the dashing Josh Kenney), and a newcomer, Timothy (whose reveal later in the play, by the lovely Tim Abrams is, well, quite revealing. Wow.) Also of note is T. Thompson, who is quite simply a very fine actor, as is Jeremy Lawrence. They both take the stage with excellent timing and believable choices. Excellent work by Sarah Smithton, Ben Strothmann, Patrick Porter, GaBe MoRaLes, and Desmond Dutcher round out the company’s fine work.

There is much humor in Wilson’s work, but there is a fine understanding of the gravity of this historic time, as well. The moment that Ceil, a drag queen, is struck down, smashed in the face with a billy club by an undercover cop, is truly breathtaking. On the night I attended, there was an audible gasp throughout the audience. Stunned, down on her knees, her dignity broken for a moment, Ceil quietly asks, “Did that feel good to you?” It’s a huge question. It’s the question of the ages. It’s the question, and it’s the reality that the LGBT community has seen played out again and again in our history and it’s happening now all over the country. Trump’s rhetoric has paved the way for this type of atrocity.

The message? We’re losing our humanity. It’s all here in Wilson’s frothy, ruined mélange of characters; we need only attend the performance to remind ourselves why we worked so very hard to attain a full place in society to begin with. Resist. Take a walk, a strut, a hustle, a stroll and get yourself to Street Theater at the Eagle Bar NYC. Be one of the people, don’t wait. Don’t miss the fun and the rage and keep resisting, folks, because love always wins.

In Manhattan at Eagle Bar NYC