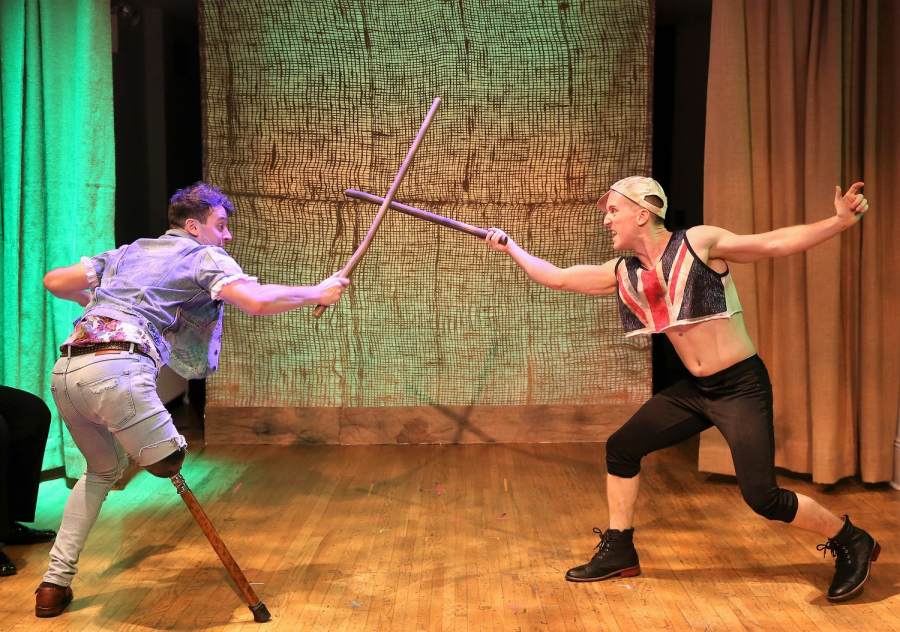 If I could fill this review with synonyms for “brilliant” it still wouldn’t be enough, or do justice to just how good Bastard Jones is.

Writer and director Marc Acito and composer/lyricist Amy Engelhardt provide a rock musical extravaganza that stays true to the picaresque novel it is based on: The history of Tom Jones; A Foundling by Henry Fielding. Tom Jones is a goodhearted, but ever so-over-sexed lad who always tries to do the right thing even though he is surrounded by those who would deem themselves to be “better” than him, yet lack social morals.

Marc Acito’s vision to have “theater that is inclusive, collaborative and reflective of positive social change” is certainly realized in this most joyous and innovative production. Seemingly simplistic -- it makes multiple uses of a dining room table and a bed sheet -- there is yet a lavishness to the production. While the production is not short in props or glorious costumes, it was the quirky multi-purpose use of such items that made the production feel at once minimalist and full. I do not want to dismiss the inclusion of the wooden leg of real-life amputee Evan Ruggiero, who played Tom Jones, as a weapon in some fight scenes, but it should also be noted that this fact is merely a natural part of the production, in keeping with Acito’s aforementioned vision – that Ruggiero’s wooden leg was as readily accepted as another actor might have blonde hair.

Through all the rollicking and romping very much in the style of a British farce there is brilliant comedic timing by every single actor, catchy and powerful songs, and outstanding physical comedy. All of this lies within a strong message: To Thine Own Self Be True. Tom gets banished from his adopted home because of misunderstandings and people's bias, he gets conscripted into the army, and at one point becomes a toy-boy for an aristocrat. It somehow manages to be sexy and hilarious at the same time due to the ensemble of incredibly talented triple-threat actors who also take turns in playing different characters throughout in addition to their own main roles which adds lightheartedness to the jaunty antics.

You should run to see this show now. Run now, before you have to go on a waitlist to see it on Broadway where it will surely find a deserving, long term home.

In Manhattan at Cell, The

Interview: With ‘Bastard Jones’ Marc Acito and Amy Engelhardt Are Doing Musical Theatre for a Good Cause

Henry Fielding’s The History of Tom Jones, a Foundling caused such a stir in 18th-century England that it was blamed for a natural disaster, its tale of a bastard trying to find happiness above all costs seeming immoral during a time when virtue equaled utmost societal correctness. When a couple of centuries later it was turned into a motion picture, it won the Oscar for Best Picture and became one of the most iconic films of a decade characterized by sexual revolution and the pursuit of pleasure. With their musical Bastard Jones Marc Acito (director, book writer, lyricist) and Amy Engelhardt (music and lyrics) seek to bring the novel’s timeless themes to a modern audience by focusing on the idea of being disavowed and excluded by others. In order to mount a production of their delicious-sounding musical, they’ve started a GoFundMe campaign that will allow them to do the show as they envisioned it, and will make it possible for the production to be nonprofit, as all royalties will go to Cyndi Lauper’s True Colors Fund. I spoke to Acito and Engelhardt about their exciting project. Why did you want to make a musical of Tom Jones? Amy Engelhardt: (Laughs) For starters it’s not the Wel …Read more

Review of ‘On a Clear Day You Can See Forever’
Review: Woody Sez
Review of ‘Hershey Felder as Irving Berlin’
Review of ‘Pula! Botswana on Broadway’