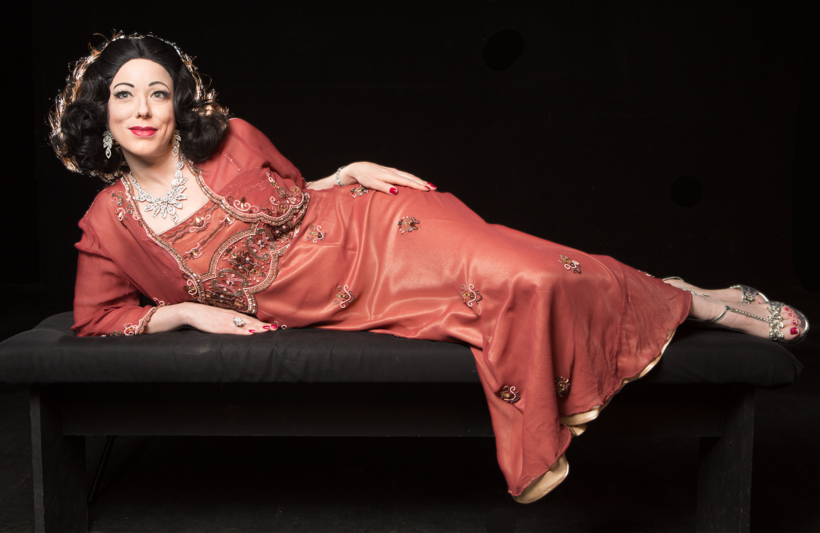 Austrian-born screen star Hedy Lamarr (originally Hedwig Eva Maria Kiesler) was often touted as the world’s most beautiful woman. In the monodrama Hedy! The Life & Inventions of Hedy Lamarr (presented as part of the Planet Connections Theatre Festival), Lamarr (Heather Massie) claims that beauty has been both a blessing and a curse. That, of course, is what extremely prepossessing people tend to say—while the rest of us shake our heads and mutter, “Yes, a curse. What a pity you’re not plainer.”

As depicted by Massie (who also wrote the show’s script), Lamarr at times takes great delight in her own physical splendor. She uses it—enhanced by a winsome manner—to get what she wants, be it favorable terms for a contract at MGM or the sale of war bonds during World War II. It does say something about the quest for womanly perfection, though, to consider that even the most beautiful woman of all had to hear men carp about the smallness of her breasts.

Anyone creating a one-person show about a deceased figure is faced with choosing from a limited range of options for telling the story. Some writers select a key time in the person’s life (usually during his or her twilight years), for the character to look back and evaluate what has gone before. Others choose to tell the story after the person’s death. The most cringe-worthy among the latter set are plays in which the person is shown awaiting Judgment Day: sitting in some purgatorial waiting room or vamping verbally in order to get past the velvet rope controlled by Saint Peter. Massie’s solution in Hedy! is much better than that. She has the late Lamarr reside in a kind of limbo-land where she is able to interact with living mortals—if, that is, they are able to ask her “the right questions.”

What Massie’s Lamarr would consider “wrong” questions include those pertaining to her reputation for litigiousness, her arrests for shoplifting, and her bouts with plastic surgery. Questions about her career as a movie star in the 1930s and 1940s would be permissible. But the really “good” questions are those having to do with her life as an inventor. Lamarr, along with composer George Antheil, helped develop an anti-jamming system for torpedoes (utilizing rapidly fluctuating radio frequencies) during WWII. Massie stresses that the technology Lamarr helped develop was later harnessed for use in cellular phones, Wi-Fi, and GPS systems—but, because the innovation came in part from a woman, it was neglected by men in power during the war. “Male pride, standing in the way of progress!” the character fumes.

Massie presents the actor/inventor as a charming and good-humored person. She glides across the stage, her arms and hands moving gracefully. She interacts sweetly with individual members of the audience. In addition to portraying Lamarr, Massie assumes an array of other characters: the star’s family members, some of her six husbands, and such fellow movie performers as George Sanders, Clark Gable, James Stewart, and Bette Davis. (Her Stewart impersonation is especially sharp, but she should continue polishing her take on Davis, who sounded to me more like Katharine Hepburn.) It’s always somewhat awkward when a performer in a solo show breaks from the main characterization to take on supporting roles like this, but Massie proves quickly here that she’s up to the task.

In Manhattan at Teatro Latea